You Are Here:
Home →
Health Topics →
Chagas Disease
URL of this page: https://medlineplus.gov/chagasdisease.html

What is Chagas disease?

Chagas disease, or American trypanosomiasis, is an illness that can cause serious heart and stomach problems. It is caused by a parasite. Chagas disease is common in Latin America, especially in poor, rural areas. It can also be found in the United States, most often in people who were infected before they moved to the U.S.

Chagas disease is caused by the Trypanosoma cruzi parasite. It is usually spread by infected blood-sucking bugs called triatomine bugs. They are also known as "kissing bugs" because they often bite people's faces. When one of these bugs bites you, it leaves behind infected waste. You can become infected if you rub the waste in your eyes or nose, the bite wound, or a cut.

Chagas disease can also spread through contaminated food, a blood transfusion, a donated organ, or from the pregnant parent to the baby during pregnancy.

Who is more likely to develop Chagas disease?

Kissing bugs can be found throughout the Americas, but they are more common in certain areas. The people who are most at risk for Chagas disease:

What are the symptoms of Chagas disease?

In the beginning, there may be no symptoms. Some people do get mild symptoms, such as:

These early symptoms usually go away. However, if you don't treat the infection, it stays in your body. Later, it can cause serious intestinal and heart problems such as:

How is Chagas disease diagnosed?

To find out if you have Chagas disease, your health care provider:

What are the treatments for Chagas disease?

Medicines can kill the parasite, especially early on. You can also treat related problems. For example, a pacemaker can help with some heart complications.

Can Chagas disease be prevented?

There are no vaccines or medicines to prevent Chagas disease. If you travel to areas where it occurs, you are at higher risk if you sleep outdoors or are staying in poor housing conditions. It is important to use insecticides to prevent bites and practice food safety. 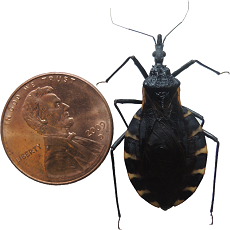