You Are Here:
Home →
Genetics →
Help Me Understand Genetics →
Cells and DNA →
What is DNA?
URL of this page: https://medlineplus.gov/genetics/understanding/basics/dna/

DNA, or deoxyribonucleic acid, is the hereditary material in humans and almost all other organisms. Nearly every cell in a person’s body has the same DNA. Most DNA is located in the cell nucleus (where it is called nuclear DNA), but a small amount of DNA can also be found in the mitochondria (where it is called mitochondrial DNA or mtDNA). Mitochondria

are structures within cells that convert the energy from food into a form that cells can use.

The information in DNA is stored as a code made up of four chemical bases: adenine (A), guanine (G), cytosine (C), and thymine (T). Human DNA consists of about 3 billion bases, and more than 99 percent of those bases are the same in all people. The order, or sequence, of these bases determines the information available for building and maintaining an organism, similar to the way in which letters of the alphabet appear in a certain order to form words and sentences.

DNA bases pair up with each other, A with T and C with G, to form units called base pairs. Each base is also attached to a sugar molecule and a phosphate molecule. Together, a base, sugar, and phosphate are called a nucleotide. Nucleotides are arranged in two long strands that form a spiral called a double helix. The structure of the double helix is somewhat like a ladder, with the base pairs forming the ladder’s rungs and the sugar and phosphate molecules forming the vertical sidepieces of the ladder.

An important property of DNA is that it can replicate, or make copies of itself. Each strand of DNA in the double helix can serve as a pattern for duplicating the sequence of bases. This is critical when cells divide because each new cell needs to have an exact copy of the DNA present in the old cell.

DNA is a double helix formed by base pairs attached to a sugar-phosphate backbone. 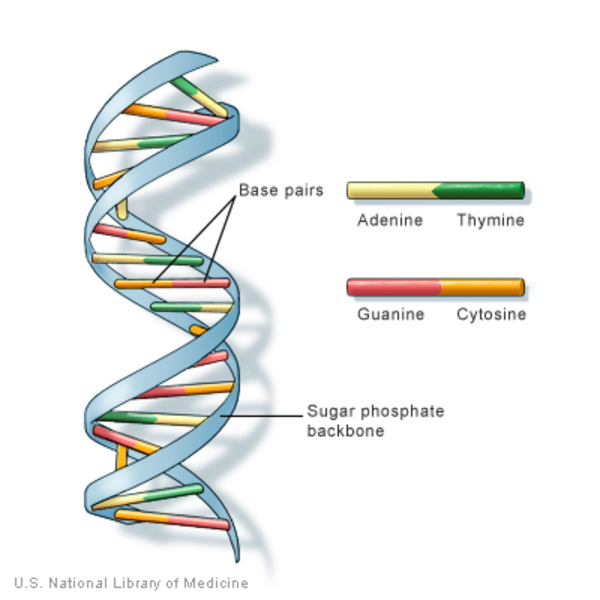 For more information about DNA:

The National Human Genome Research Institute (NHGRI), a part of the National Institutes of Health (NIH), provides a fact sheet Deoxyribonucleic Acid (DNA) that gives an introduction to this molecule.

StatedClearly offers a video introduction to DNA and how it works.

The New Genetics, a publication of the National Institute of General Medical Sciences, part of the NIH, discusses the structure of DNA and how it was discovered.

A basic explanation and illustration of DNA can be found on Arizona State University's "Ask a Biologist" website.

The Virtual Genetics Education Centre, created by the University of Leicester, offers additional information on DNA, genes, and chromosomes.

An overview of mitochondrial DNA is available from the Neuromuscular Disease Center at Washington University in St. Louis.

Topics in the Cells and DNA chapter