X-linked acrogigantism (X-LAG) is a condition that causes abnormally fast growth beginning early in life. Babies with this condition are a normal size at birth but begin to grow rapidly in infancy or early childhood, and affected children are taller than their peers.

. The pituitary gland, which is found at the base of the brain, produces hormones that control many important body functions, including growth. Individuals with X-LAG may have the condition as a result of enlargement (hyperplasia) of the gland or development of a noncancerous tumor in the gland (called a pituitary adenoma). Rarely, an affected individual has both pituitary hyperplasia and an adenoma. The abnormal gland releases excess amounts of growth hormone, a hormone that normally helps direct growth of the body's bones and tissues. Some people with X-LAG also have excess amounts of a hormone called growth hormone releasing hormone (GHRH), which is produced by a part of the brain called the hypothalamus. This hormone stimulates the release of growth hormone from the pituitary gland.

Some people with X-LAG have additional signs and symptoms such as facial features that are described as coarse; disproportionately large hands or feet (acral enlargement); an increased appetite; and a skin condition called acanthosis nigricans, in which the skin in body folds and creases becomes thick, dark, and velvety.

X-LAG is thought to be a rare condition, although the prevalence is not known. It occurs more frequently in females than in males. X-LAG accounts for one in ten cases of abnormally fast growth in children that is caused by pituitary gland abnormalities (pituitary gigantism).

). The duplication, often referred to as an Xq26.3 microduplication, occurs on the long (q) arm of the chromosome at a location designated q26.3. It can include several genes, but only duplication of the GPR101 gene is necessary to cause X-LAG.

The GPR101 gene provides instructions for making a protein whose function is unknown. Studies suggest that the GPR101 protein is involved in the growth of cells in the pituitary gland

or in the release of growth hormone from the gland.

Duplication of the GPR101 gene leads to an excess of GPR101 protein. It is unclear how extra GPR101 protein results in the development of a pituitary adenoma or hyperplasia or in the release of excess growth hormone or GHRH.

. In females (who have two X chromosomes), a duplication of one of the two copies of the GPR101 gene in each cell is sufficient to cause the disorder. In males (who have only one X chromosome), a duplication of the only copy of the gene in each cell causes the disorder. A characteristic of X-linked inheritance is that fathers cannot pass X-linked traits to their sons.

In females, the condition results from new (de novo

) duplications involving the GPR101 gene that occur during the formation of a parent's reproductive cells (eggs or sperm). The duplication is found in all of the cells in the affected person's body.

In males, the condition often results from somatic mosaicism

, in which some of an affected person's cells have the duplication and others do not. The genetic changes, which are called somatic mutations, arise randomly in one cell during embryonic development. As cells continue to divide, only cells arising from the first abnormal cell will have the mutation. Other affected males inherit the duplication from their affected mother, and it is found in all the body's cells. 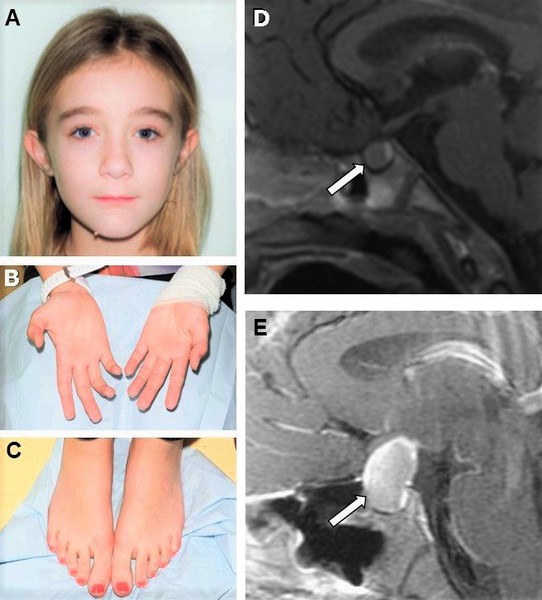