Tetrasomy 18p is a chromosomal condition that affects many parts of the body. This condition usually causes feeding difficulties in infancy, delayed development, intellectual disability that is often mild to moderate but can be severe, changes in muscle tone, distinctive facial features, and other birth defects. However, the signs and symptoms vary among affected individuals.

Babies with tetrasomy 18p often have trouble feeding and may vomit frequently, which makes it difficult for them to gain weight. Some affected infants also have breathing problems and jaundice, which is a yellowing of the skin and the whites of the eyes.

Changes in muscle tone are commonly seen with tetrasomy 18p. Some affected children have weak muscle tone (hypotonia), while others have increased muscle tone (hypertonia) and stiffness (spasticity). These changes contribute to delayed development of motor skills, including sitting, crawling, and walking.

Tetrasomy 18p is associated with a distinctive facial appearance that can include unusually shaped and low-set ears, a small mouth

, a flat area between the upper lip and the nose (philtrum

. Many affected individuals also have a high, arched roof of the mouth

(palate), and a few have had a split in the roof of the mouth (cleft palate

), a shortage of growth hormone, and birth defects affecting the heart and other organs. Males with tetrasomy 18p may be born with undescended testes (cryptorchidism) or the opening of the urethra on the underside of the penis (hypospadias). Psychiatric conditions, such as attention-deficit/hyperactivity disorder (ADHD) and anxiety, as well as social and behavioral challenges have also been reported in some people with tetrasomy 18p.

Tetrasomy 18p is a rare disorder. It is known to affect about 250 families worldwide.

Tetrasomy 18p results from the presence of an abnormal extra chromosome

Cells normally have two copies of each chromosome

, one inherited from each parent. In people with tetrasomy 18p, cells have the usual two copies of chromosome 18 plus an isochromosome 18p. As a result, each cell has four copies of the short arm of chromosome 18. (The word "tetrasomy" is derived from "tetra," the Greek word for "four.") The extra genetic material from the isochromosome disrupts the normal course of development, causing the characteristic features of this disorder.

Learn more about the chromosome associated with Tetrasomy 18p

Tetrasomy 18p is usually not inherited. The chromosomal change responsible for the disorder typically occurs as a random event during the formation of reproductive cells (eggs or sperm) in a parent of the affected individual, usually the mother. Most affected individuals have no history of the disorder in their family. However, rare inherited cases of tetrasomy 18p have been reported. 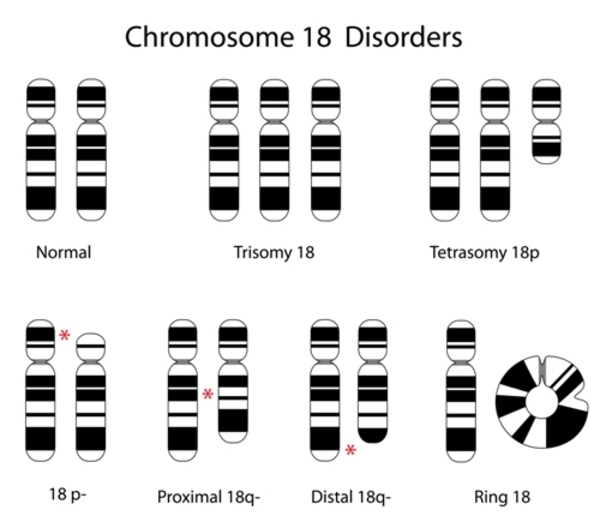