Children born with spina bifida often have a fluid-filled sac on their back that is covered by skin, called a meningocele

. If the sac contains part of the spinal cord and its protective covering, it is known as a myelomeningocele. The signs and symptoms of these abnormalities range from mild to severe, depending on where the opening in the spinal column is located and how much of the spinal cord is contained in the sac. Related problems can include a loss of feeling below the level of the opening, weakness or paralysis of the feet or legs, and problems with bladder and bowel control. Some affected individuals have additional complications, including a buildup of excess fluid around the brain (hydrocephalus) and learning problems. With surgery and other forms of treatment, many people with spina bifida live into adulthood.

Spina bifida is one of the most common types of neural tube defect, affecting an estimated 1 in 2,500 newborns worldwide. For unknown reasons, the prevalence of spina bifida varies among different geographic regions and ethnic groups. In the United States, this condition occurs more frequently in Hispanics and non-Hispanic whites than in African Americans.

Spina bifida is a complex condition that is likely caused by the interaction of multiple genetic and environmental factors. Some of these factors have been identified, but many remain unknown.

Changes in dozens of genes in individuals with spina bifida and in those of their mothers may influence the risk of developing this type of neural tube defect. The best-studied of these genes is MTHFR, which provides instructions for making a protein that is involved in processing the vitamin folate (also called vitamin B9). A shortage (deficiency) of this vitamin is an established risk factor for neural tube defects like spina bifida. Changes in other genes related to folate processing and genes involved in the development of the neural tube have also been studied as potential risk factors for spina bifida. However, none of these genes appears to play a major role in causing the condition.

Researchers have also examined environmental factors that could contribute to the risk of spina bifida. As mentioned above, folate deficiency appears to play a significant role. Studies have shown that women who take supplements containing folic acid (the synthetic form of folate) before they get pregnant and very early in their pregnancy are significantly less likely to have a baby with spina bifida or a related neural tube defect. Other possible maternal risk factors for spina bifida include diabetes mellitus

, obesity, exposure to high heat (such as a fever or use of a hot tub or sauna) in early pregnancy, and the use of certain anti-seizure medications during pregnancy. However, it is unclear how these factors may influence the risk of spina bifida.

Learn more about the gene associated with Spina bifida

Most cases of spina bifida are sporadic, which means they occur in people with no history of the disorder in their family. A small percentage of cases have been reported to run in families; however, the condition does not have a clear pattern of inheritance. First-degree relatives

(such as siblings and children) of people with spina bifida have an increased risk of the condition compared with people in the general population. 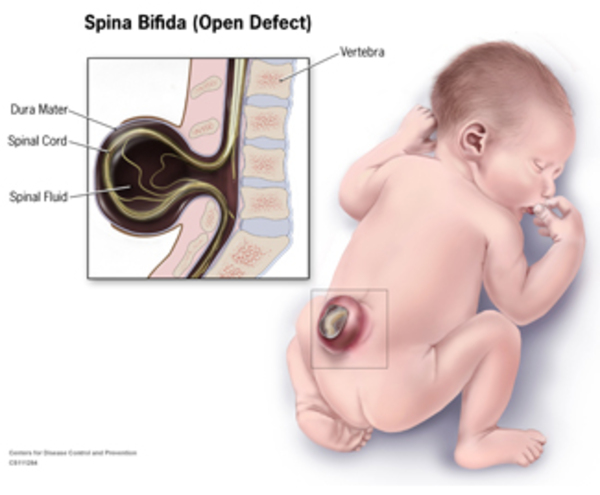