Raynaud phenomenon is a condition in which the body's normal response to cold or emotional stress is exaggerated, resulting in abnormal spasms (vasospasms) in small blood vessels called arterioles. The disorder mainly affects the fingers but can also involve the ears, nose, nipples, knees, or toes. The vasospasms reduce blood circulation, leading to discomfort and skin color changes.

Raynaud phenomenon is episodic, meaning that it comes and goes. A typical episode lasts about 15 minutes after the cold exposure or stressor has ended and involves mild discomfort such as numbness or a feeling of "pins and needles." The affected areas usually turn white or blue when exposed to cold or when emotional stress occurs, and then turn red when re-warmed or when the stress eases.

Raynaud phenomenon is a common condition, occurring in 3 to 5 percent of adults worldwide. It is more common in females than in males.

The signs and symptoms of Raynaud phenomenon are related to excessive narrowing (constriction) of small blood vessels in response to cold or stress. Variations in genes involved in this process may contribute to an individual's risk of developing Raynaud phenomenon, but the connection between these gene variations and the abnormal blood vessel response that occurs in this disorder is unknown.

Normally, blood vessels constrict and widen (dilate) in response to temperature changes and stress, a process called the vasomotor response. The nervous system and muscle cells in the walls of blood vessels control this response. When exposed to cold temperatures, blood vessels near the surface constrict to help keep warm blood in the body's core, near the vital organs. Blood vessels also constrict during stress as part of the body's "fight-or-flight" response, conserving the oxygen and heat carried by the blood for the body's basic functions. When the body is too warm, the surface vessels dilate to allow more blood to flow near the skin where it is cooler. Raynaud phenomenon is characterized by exaggeration of these normal vasomotor responses.

There are many causes of secondary Raynaud phenomenon. These include autoimmune disease; partial or complete loss of function of the thyroid gland

(hypothyroidism); cancers of the blood, bone marrow, or immune system; disease processes that cause obstruction of blood vessels; exposure to certain medicines or chemicals; cigarette smoking; injury or trauma; prolonged repetitive motions such as typing; or long-term use of vibrating tools.

Raynaud phenomenon sometimes runs in families, but the inheritance pattern is unknown. Studies suggest that about 30 percent of people with a first-degree relative (parent, sibling or child) who has primary Raynaud phenomenon also have the condition. 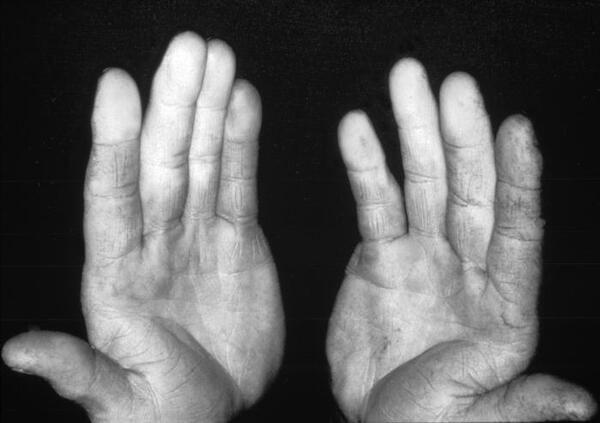