You Are Here:
Home →
Genetics →
Genetic Conditions →
Phenylketonuria
URL of this page: https://medlineplus.gov/genetics/condition/phenylketonuria/

Phenylketonuria (commonly known as PKU) is an inherited disorder that increases the levels of a substance called phenylalanine in the blood. Phenylalanine is a building block of proteins (an amino acid

) that is obtained through the diet. It is found in all proteins and in some artificial sweeteners. If PKU is not treated, phenylalanine can build up to harmful levels in the body, causing intellectual disability and other serious health problems.

The signs and symptoms of PKU vary from mild to severe. The most severe form of this disorder is known as classic PKU. Infants with classic PKU appear normal until they are a few months old. Without treatment, these children develop permanent intellectual disability. Seizures, delayed development, behavioral problems, and psychiatric disorders are also common. Untreated individuals may have a musty or mouse-like odor as a side effect of excess phenylalanine in the body. Children with classic PKU tend to have lighter skin and hair than unaffected family members and are also likely to have skin disorders such as eczema.

Less severe forms of this condition, sometimes called variant PKU and non-PKU hyperphenylalaninemia, have a smaller risk of brain damage. People with very mild cases may not require treatment with a low-phenylalanine diet.

Babies born to mothers who have PKU and uncontrolled phenylalanine levels (women who no longer follow a low-phenylalanine diet) have a significant risk of intellectual disability because they are exposed to very high levels of phenylalanine before birth. These infants may also have a low birth weight and grow more slowly than other children. Other characteristic medical problems include heart defects or other heart problems, an abnormally small head size (microcephaly

), and behavioral problems. Women with PKU and uncontrolled phenylalanine levels also have an increased risk of pregnancy loss.

The occurrence of PKU varies among ethnic groups and geographic regions worldwide. In the United States, PKU occurs in 1 in 10,000 to 15,000 newborns. Most cases of PKU are detected shortly after birth by newborn screening, and treatment is started promptly. As a result, the severe signs and symptoms of classic PKU are rarely seen.

Mutations in the PAH gene cause phenylketonuria. The PAH gene provides instructions for making an enzyme called phenylalanine hydroxylase

. This enzyme converts the amino acid

phenylalanine to other important compounds in the body. If gene mutations reduce the activity of phenylalanine hydroxylase, phenylalanine from the diet is not processed effectively. As a result, this amino acid can build up to toxic levels in the blood and other tissues. Because nerve cells in the brain are particularly sensitive to phenylalanine levels, excessive amounts of this substance can cause brain damage.

Classic PKU, the most severe form of the disorder, occurs when phenylalanine hydroxylase activity is severely reduced or absent. People with untreated classic PKU have levels of phenylalanine high enough to cause severe brain damage and other serious health problems. Mutations in the PAH gene that allow the enzyme to retain some activity result in milder versions of this condition, such as variant PKU or non-PKU hyperphenylalaninemia.

Changes in other genes may influence the severity of PKU, but little is known about these additional genetic factors.

Learn more about the gene associated with Phenylketonuria 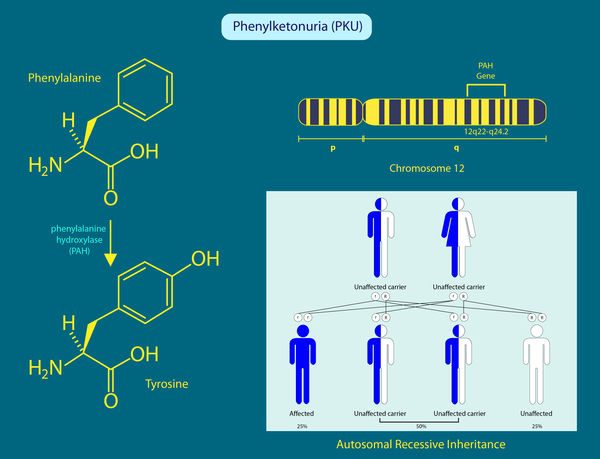