Paroxysmal nocturnal hemoglobinuria (PNH) is an acquired (not inherited) disorder that leads to the premature death and impaired production of blood cells. The disorder affects red blood cells (erythrocytes), which carry oxygen; white blood cells (leukocytes), which protect the body from infections; and platelets (thrombocytes), which are involved in blood clotting. PNH can occur at any age, although it is most often diagnosed in young adulthood.

People with PNH have sudden, recurring episodes of symptoms (paroxysmal symptoms), which may be triggered by stresses on the body, such as infections or physical exertion. During these episodes, red blood cells are broken down earlier than they should be (hemolysis). Affected individuals may pass dark-colored urine because of the presence of hemoglobin, the oxygen-carrying protein in blood. The abnormal presence of hemoglobin in the urine is called hemoglobinuria. In many, but not all cases, hemoglobinuria is most noticeable early in the morning, upon passing urine that has accumulated in the bladder during the night (nocturnal).

), which can cause signs and symptoms

such as fatigue, weakness, abnormally pale skin (pallor), shortness of breath, and an increased heart rate (tachycardia). People with PNH may also be prone to infections because of a shortage of white blood cells (leukopenia).

Abnormal platelets associated with PNH can cause problems in the blood clotting process. As a result, people with this disorder may experience abnormal blood clotting (thrombosis), especially in large abdominal veins; or, less often, episodes of severe bleeding (hemorrhage).

Individuals with PNH are at increased risk of developing cancer in blood-forming cells (leukemia). In some cases, people who have or have been treated for another blood disease called aplastic anemia may develop PNH. In a small number of affected individuals, the signs and symptoms of PNH disappear on their own.

A very rare form of PNH involves abnormal inflammation in addition to the typical features described above. Inflammation is a normal immune system response to injury and foreign invaders (such as bacteria). In people with this rare form of PNH, the immune response is turned on (activated) abnormally and can cause recurrent aseptic meningitis (which is inflammation of the membranes surrounding the brain and spinal cord that is not related to infection); a red, itchy rash (known as hives or urticaria); joint pain (arthralgia); or inflammatory bowel disease. The inflammatory disorders usually begin earlier than the blood cell problems.

PNH is a rare disorder, estimated to affect between 1 and 5 per million people. The inflammatory form of the disorder is extremely rare and has been identified in a very small number of individuals.

Variants (also known as mutations) in the PIGA gene cause almost all cases of PNH. Variants in the PIGT gene cause the rare, inflammatory form of the condition. The proteins produced from both genes are involved in a multistep process that connects particular proteins to the surface of cells. These proteins are attached to the cell by a specialized molecule called GPI anchor and are known as GPI-anchored proteins. The PIG-A protein helps produce the GPI anchor, and the PIG-T protein helps attach the GPI anchor to proteins. Anchored proteins have a variety of roles, including sticking cells to one another, relaying signals into cells, and protecting cells from destruction.

In people with PNH, variants of the PIGA gene occur during a person’s lifetime and are present only in certain cells. These changes, which are called somatic variants, are not inherited. In contrast, people with the inflammatory form of the condition inherit one altered copy of the PIGT gene. However, for the condition to occur, they need to also acquire a somatic variant that deletes the other copy of the PIGT gene and other genes around it.

Cells with no PIG-A protein do not produce GPI anchor, and therefore are missing GPI-anchored proteins at the surface. Cells with no PIG-T protein produce GPI anchor but cannot attach proteins to it. As a result, these cells have GPI anchor on the surface, but no attached proteins. Two important GPI-anchored proteins on red blood cells protect them from being broken down by the immune system. Without these proteins, the abnormal red blood cells are prematurely destroyed, leading to hemolytic anemia. Studies show that GPI anchors with no attached proteins trigger inflammation in the body, leading to the inflammatory features in individuals with PIGT-related PNH. It is unclear how changes in the PIGA or PIGT gene affect other types of blood cells.

In individuals with either form of PNH, the proportion of abnormal blood cells can vary. It is unclear why the population of cells that grow from the hematopoietic stem cell with a PIGA gene variant may be larger than the population of normal cells in some affected individuals and smaller in others. Research suggests that certain abnormal white blood cells that are also part of the immune system may mistakenly attack normal blood-forming cells, in a malfunction called an autoimmune process. In addition, abnormal hematopoietic stem cells in people with PNH may be less susceptible than normal cells to a process called apoptosis, which causes cells to self-destruct when they are damaged or unneeded.

Learn more about the genes associated with Paroxysmal nocturnal hemoglobinuria

PNH is acquired, rather than inherited. Most cases result from new variants in the PIGA gene, and generally occur in people with no previous history of the disorder in their family. This form of the condition is not passed down to children of affected individuals.

The PIGA gene is located on the X chromosome, which is one of the two sex chromosomes

. Males have only one X chromosome, and a variant in the only copy of the PIGA gene in each cell is sufficient to cause the condition. Females have two X chromosomes. However, early in embryonic development in females, one of the two X chromosomes is permanently inactivated in somatic cells (cells other than egg and sperm cells). This process, called X-inactivation, ensures that females, like males, have only one active copy of the X chromosome in each body cell. In females, a variant in the active copy of the PIGA gene is sufficient to cause the condition. 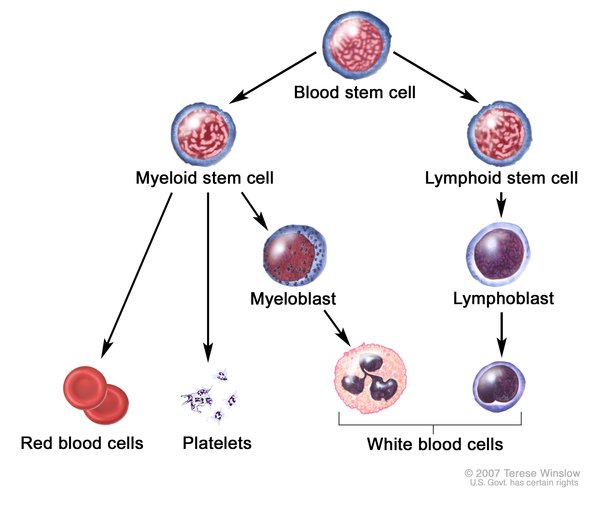