Parkinson disease is a progressive disorder of the nervous system. The disorder affects several regions of the brain, especially an area called the substantia nigra that controls balance and movement.

Often the first symptom of Parkinson disease is trembling or shaking (tremor) of a limb, especially when the body is at rest. Typically, the tremor begins on one side of the body, usually in one hand. Tremors can also affect the arms, legs, feet, and face. Other characteristic symptoms of Parkinson disease include rigidity or stiffness of the limbs and torso, slow movement (bradykinesia) or an inability to move (akinesia), and impaired balance and coordination (postural instability). These symptoms worsen slowly over time.

Parkinson disease can also affect emotions and thinking ability (cognition). Some affected individuals develop psychiatric conditions such as depression and visual hallucinations. People with Parkinson disease also have an increased risk of developing dementia, which is a decline in intellectual functions including judgment and memory.

The late-onset form is the most common type of Parkinson disease, and the risk of developing this condition increases with age. Because more people are living longer, the number of people with this disease is expected to increase in coming decades.

Most cases of Parkinson disease probably result from a complex interaction of environmental and genetic factors. These cases are classified as sporadic and occur in people with no apparent history of the disorder in their family. The cause of these sporadic cases remains unclear.

Approximately 15 percent of people with Parkinson disease have a family history of this disorder. Familial cases of Parkinson disease can be caused by mutations in the LRRK2, PARK7, PINK1, PRKN, or SNCA gene, or by alterations in genes that have not been identified. Mutations in some of these genes may also play a role in cases that appear to be sporadic (not inherited).

Alterations in certain genes, including GBA and UCHL1, do not cause Parkinson disease but appear to modify the risk of developing the condition in some families. Variations in other genes that have not been identified probably also contribute to Parkinson disease risk.

It is not fully understood how genetic changes cause Parkinson disease or influence the risk of developing the disorder. Many Parkinson disease symptoms occur when nerve cells (neurons) in the substantia nigra die or become impaired. Normally, these cells produce a chemical messenger called dopamine

, which transmits signals within the brain to produce smooth physical movements. When these dopamine-producing neurons are damaged or die, communication between the brain and muscles weakens. Eventually, the brain becomes unable to control muscle movement.

Some gene mutations appear to disturb the cell machinery that breaks down (degrades) unwanted proteins in dopamine-producing neurons. As a result, undegraded proteins accumulate, leading to the impairment or death of these cells. Other mutations may affect the function of mitochondria

, the energy-producing structures within cells. As a byproduct of energy production, mitochondria make unstable molecules called free radicals that can damage cells. Cells normally counteract the effects of free radicals before they cause damage, but mutations can disrupt this process. As a result, free radicals may accumulate and impair or kill dopamine-producing neurons.

appear in dead or dying dopamine-producing neurons. (When Lewy bodies are not present, the condition is sometimes referred to as parkinsonism.) It is unclear whether Lewy bodies play a role in killing nerve cells or if they are part of the cells' response to the disease.

Learn more about the genes associated with Parkinson disease

Most cases of Parkinson disease occur in people with no apparent family history of the disorder. These sporadic cases may not be inherited, or they may have an inheritance pattern that is unknown.

Among familial cases of Parkinson disease, the inheritance pattern differs depending on the gene that is altered. If the LRRK2 or SNCA gene is involved, the disorder is inherited in an autosomal dominant pattern

, which means one copy of an altered gene in each cell is sufficient to cause the disorder. In most cases, an affected person has one parent with the condition.

If the PARK7, PINK1, or PRKN gene is involved, Parkinson disease is inherited in an autosomal recessive pattern

. This type of inheritance means that two copies of the gene in each cell are altered. Most often, the parents of an individual with autosomal recessive Parkinson disease each carry one copy of the altered gene but do not show signs and symptoms of the disorder.

When genetic alterations modify the risk of developing Parkinson disease, the inheritance pattern is usually unknown. 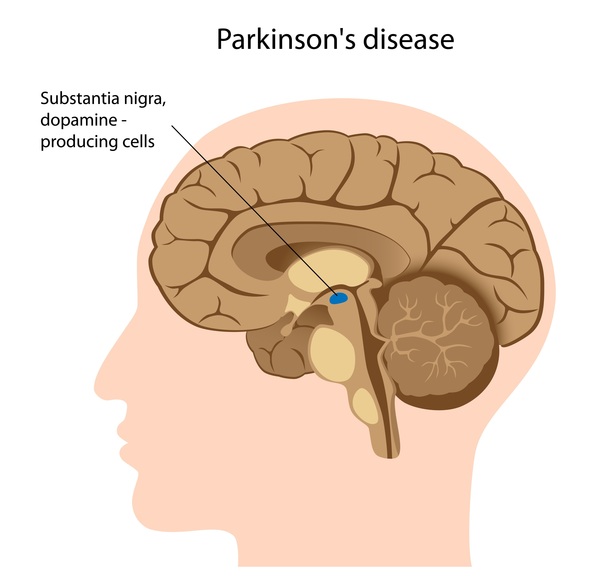