Ornithine translocase deficiency is an inherited disorder that causes ammonia and other substances to build up (accumulate) in the blood. Ammonia, which is formed when proteins are broken down in the body, is toxic if the levels become too high. The nervous system is especially sensitive to the effects of excess ammonia.

Infants with ornithine translocase deficiency may lack energy (be lethargic), refuse to eat, vomit frequently, or have poorly controlled breathing or body temperature. Seizures or unusual body movements are common in these individuals. Some people with this condition have intellectual disability or developmental delay, but others have normal intelligence. Severe cases may result in coma.

While the signs and symptoms of ornithine translocase deficiency can vary greatly among affected individuals, proper treatment can prevent some complications from occurring and may improve quality of life.

Ornithine translocase deficiency is a very rare disorder. More than 100 affected individuals have been described in the scientific literature.

, which is a sequence of biochemical reactions that occurs in liver

cells. The urea cycle breaks down excess nitrogen, made when protein is broken down by the body, to make a compound called urea that is excreted by the kidneys in urine.

Mitochondrial ornithine transporter 1 is located within the mitochondria

(the energy-producing centers in cells), where the protein transports a molecule called ornithine so it can participate in the urea cycle.

Mutations in the SLC25A15 gene cause the production of a mitochondrial ornithine transporter 1 with reduced or absent function. As a result, ornithine transport is impaired and the urea cycle cannot proceed normally. This causes, nitrogen to accumulate in the bloodstream in the form of toxic ammonia instead of being converted to less toxic urea and being excreted. Ammonia is especially damaging to the brain, and excess ammonia causes neurological problems and other signs and symptoms of ornithine translocase deficiency. Byproducts of impaired ornithine transport in people with this condition include the accumulation of a substance called ornithine in the blood (hyperornithinemia) and the excretion of a substance called homocitrulline in the urine (homocitrullinuria).

Because ornithine translocase deficiency is caused by problems with the urea cycle, it belongs to a class of genetic diseases called urea cycle disorders.

Learn more about the gene associated with Ornithine translocase deficiency 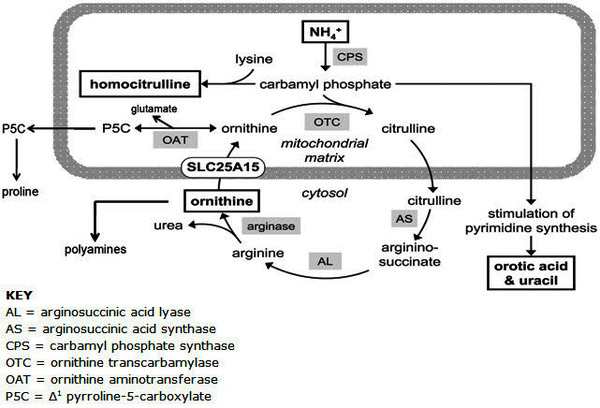