Most people with MCTT syndrome have mild to moderate intellectual disability. Many affected individuals are nonverbal, but some have speech limited to one or two words or communicate using sign language. Most children with this condition have delayed development of motor skills, such as crawling or walking, but are able to walk by age 2 or 3. However, they often need help with fine-motor skills, such as getting dressed or using a fork when eating.

); a high arch in the roof of the mouth (high-arched palate

); outside corners of the eyes that point downward (downslanting palpebral fissures

. Some affected individuals have dental abnormalities, such as cone-shaped (conical

People with MCTT syndrome often have characteristic brain abnormalities. The surface of the brain

normally has many ridges or folds, called gyri. A common brain abnormality in people with MCTT syndrome is called perisylvian polymicrogyria, in which an area of the brain called the perisylvian region develops too many gyri, and the folds are irregular and unusually small. Individuals with MCTT syndrome can also have a malformation of the part of the brain that coordinates movement (the cerebellum

, is characterized by tissue loss in the central part of the cerebellum (known as the vermis) and fusion of the two sides of the cerebellum. These brain abnormalities likely contribute to the movement problems and intellectual disability that are common in MCTT syndrome.

The prevalence of MCTT syndrome is unknown, although it is thought to be a rare disorder. At least 25 affected individuals have been described in the scientific literature.

MCTT syndrome is caused by mutations in the MN1 gene. This gene provides instructions for making a protein whose function is unclear.  Based on its interaction with other proteins, the MN1 protein is thought to play a role in regulating the activity of other genes, particularly those needed for the development of the skull and brain.

All MN1 gene mutations that cause MCTT syndrome occur near the end (terminal) portion of the gene. As a result, an abnormally short (truncated) protein is produced. These mutations are reflected in the condition name, MN1 C-terminal truncation syndrome.

Research shows that a shortened MN1 protein cannot interact with other proteins, leading to a buildup of the abnormal MN1 protein in the cell nucleus. It is likely that without the normal function of the MN1 protein, the activity of certain genes involved in the development of the skull and brain is unregulated, leading to the signs and symptoms of MCTT syndrome.

MCTT syndrome is inherited in an autosomal dominant pattern

Most cases of this condition result from new (de novo) mutations in the MN1 gene that occur during the formation of reproductive cells (eggs or sperm) in an affected individual's parent or in early embryonic development. These cases occur in people with no history of the disorder in their family. 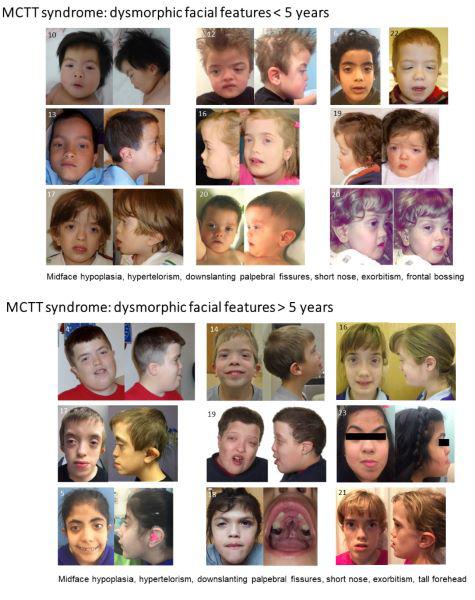