Menkes syndrome is a disorder that affects copper levels in the body. It is characterized by sparse, kinky hair; failure to gain weight and grow at the expected rate (failure to thrive); and deterioration of the nervous system. Additional signs and symptoms include weak muscle tone (hypotonia), sagging facial features, seizures, developmental delay, and intellectual disability. Children with Menkes syndrome typically begin to develop symptoms during infancy and often do not live past age 3. Early treatment with copper may improve the prognosis in some affected individuals. In rare cases, symptoms begin later in childhood.

Occipital horn syndrome (sometimes called X-linked cutis laxa) is a less severe form of Menkes syndrome that begins in early to middle childhood. It is characterized by wedge-shaped calcium deposits in a bone at the base of the skull (the occipital bone), coarse hair, and loose skin and joints.

The incidence of Menkes syndrome and occipital horn syndrome is estimated to be 1 in 100,000 newborns.

Mutations in the ATP7A gene cause Menkes syndrome. The ATP7A gene provides instructions for making a protein that is important for regulating copper levels in the body. Copper is necessary for many cellular functions, but it is toxic when present in excessive amounts. Mutations in the ATP7A gene result in poor distribution of copper to the body's cells. Copper accumulates in some tissues, such as the small intestine and kidneys, while the brain and other tissues have unusually low levels of copper. The decreased supply of copper can reduce the activity of numerous copper-containing enzymes that are necessary for the structure and function of bone, skin, hair, blood vessels, and the nervous system. The signs and symptoms of Menkes syndrome and occipital horn syndrome are caused by the reduced activity of these copper-containing enzymes.

Learn more about the gene associated with Menkes syndrome

Menkes syndrome is inherited in an X-linked recessive pattern

. The gene associated with this condition is located on the X chromosome, which is one of the two sex chromosomes. In males (who have only one X chromosome), one altered copy of the gene in each cell is sufficient to cause the condition. In females (who have two X chromosomes), a mutation would have to occur in both copies of the gene to cause the disorder. Because it is unlikely that females will have two altered copies of this gene, males are affected by X-linked recessive disorders much more frequently than females. A characteristic of X-linked inheritance is that fathers cannot pass X-linked traits to their sons.

In about one-third of cases, Menkes syndrome is caused by new mutations in the ATP7A gene. People with a new mutation do not have a history of the disorder in their family. 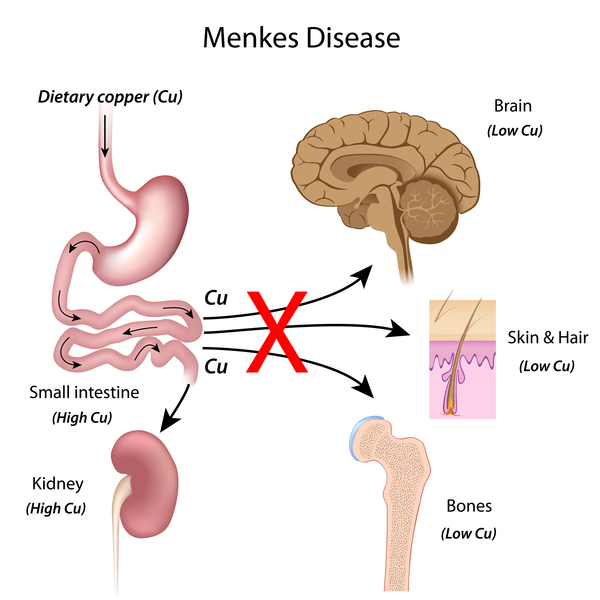