Griscelli syndrome is an inherited condition characterized by unusually light (hypopigmented) skin and light silvery-gray hair starting in infancy. Researchers have identified three types of this disorder, which are distinguished by their genetic cause and pattern of signs and symptoms.

Griscelli syndrome type 1 involves severe problems with brain function in addition to the distinctive skin and hair coloring. Affected individuals typically have delayed development, intellectual disability, seizures, weak muscle tone (hypotonia), and eye and vision abnormalities. Another condition called Elejalde disease has many of the same signs and symptoms, and some researchers have proposed that Griscelli syndrome type 1 and Elejalde disease are actually the same disorder.

People with Griscelli syndrome type 2 have immune system abnormalities in addition to having hypopigmented skin and hair. Affected individuals are prone to recurrent infections. They also develop an immune condition called hemophagocytic lymphohistiocytosis (HLH), in which the immune system produces too many activated immune cells called T-lymphocytes and macrophages (histiocytes). Overactivity of these cells can damage organs and tissues throughout the body, causing life-threatening complications if the condition is untreated. People with Griscelli syndrome type 2 do not have the neurological abnormalities of type 1.

Unusually light skin and hair coloring are the only features of Griscelli syndrome type 3. People with this form of the disorder do not have neurological abnormalities or immune system problems.

Griscelli syndrome is a rare condition; its prevalence is unknown. Type 2 appears to be the most common of the three known types.

The proteins produced from these genes are found in pigment-producing cells called melanocytes. Within these cells, the proteins work together to transport structures called melanosomes. These structures produce a pigment called melanin, which is the substance that gives skin, hair, and eyes their color (pigmentation). Melanosomes are formed near the center of melanocytes, but they must be transported to the outer edge of these cells and then transferred into other types of cells to provide normal pigmentation.

Mutations in any of the three genes, MYO5A, RAB27A, or MLPH, impair the normal transport of melanosomes within melanocytes. As a result, these structures clump near the center of melanocytes, trapping melanin within these cells and preventing normal pigmentation of skin and hair. The clumps of pigment, which can be seen in hair shafts when viewed under a microscope, are a hallmark feature of the condition.

In addition to their roles in melanosome transport, the MYO5A and RAB27A genes have functions elsewhere in the body. Specifically, the protein produced from the MYO5A gene transports materials within nerve cells (neurons) that appear to be critical for cell function. The protein produced from the RAB27A gene is found in immune system cells, where it is involved in the release of certain compounds that kill foreign invaders (such as viruses and bacteria). Mutations in these genes impair these critical cell activities, leading to the neurological problems and immune system abnormalities found in Griscelli syndrome types 1 and 2, respectively.

Learn more about the genes associated with Griscelli syndrome 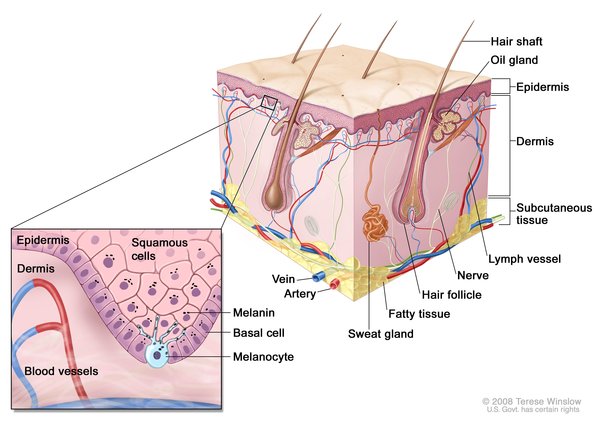