You Are Here:
Home →
Genetics →
Genetic Conditions →
Farsightedness
URL of this page: https://medlineplus.gov/genetics/condition/farsightedness/

For normal vision, light passes through the clear cornea at the front of the eye

, which is the lining of the back of the eye that contains light-sensing cells. Some people who are farsighted have eyeballs that are too short from front to back. Others have a cornea or lens that is abnormally shaped. These changes cause light entering the eye to be focused too far back, behind the retina instead of on its surface. It is this difference that causes nearby objects to appear blurry. In a person with this condition, one eye may be more farsighted than the other.

If it is not treated with corrective lenses or surgery, farsightedness can lead to eye strain, excess tearing, squinting, frequent blinking, headaches, difficulty reading, and problems with hand-eye coordination. However, some children with the eye changes characteristic of farsightedness do not notice any blurring of their vision or related signs and symptoms early in life. Other parts of the visual system are able to compensate, at least temporarily, for the changes that would otherwise cause light to be focused in the wrong place.

In general, older adults also have difficulty seeing things close up; this condition is known as presbyopia

. Presbyopia develops as the lens of the eye becomes thicker and less flexible with age and the muscles surrounding the lens weaken. Although it is sometimes described as "farsightedness," presbyopia is caused by a different mechanism than hyperopia and is considered a separate condition.

Farsightedness is a relatively common vision abnormality, although it is much less common than nearsightedness (myopia) or presbyopia. The prevalence of hyperopia decreases with age: most infants are farsighted at birth, but less than 4 percent of children have the condition at age 1. The prevalence continues to decrease into adulthood. Most cases are mild. For unknown reasons, farsightedness is reported more frequently among Native Americans, African Americans, and Pacific Islanders than in people of other backgrounds.

Farsightedness is a complex condition. Multiple genetic variations, each with a small effect, likely influence whether a person is farsighted. Few genes associated with the condition have been identified, and none of the identified genes appears to play a major role in the development of farsightedness. At least some of the genes that influence farsightedness play roles in eye development, particularly in determining the length of the eyeball from front to back (also known as the axial length). It is possible that environmental factors also contribute to a person's risk of being farsighted, but these have not been well-studied.

In many farsighted people, this vision problem is not part of a larger genetic syndrome. However, farsightedness (especially high hyperopia) can be a feature of other disorders with a genetic cause. Genetic conditions with farsightedness as a characteristic feature include microphthalmia, achromatopsia, aniridia, Leber congenital amaurosis, X-linked juvenile retinoschisis, Senior-Løken syndrome, Gorlin-Chaudhry-Moss syndrome, Down syndrome, and fragile X syndrome.

Farsightedness is a complex condition that usually does not have a clear pattern of inheritance. The risk of developing this condition is greater for first-degree relatives

of affected individuals (such as siblings or children) as compared to the general public.

When farsightedness is a feature of a genetic syndrome, it follows the inheritance pattern of that syndrome. 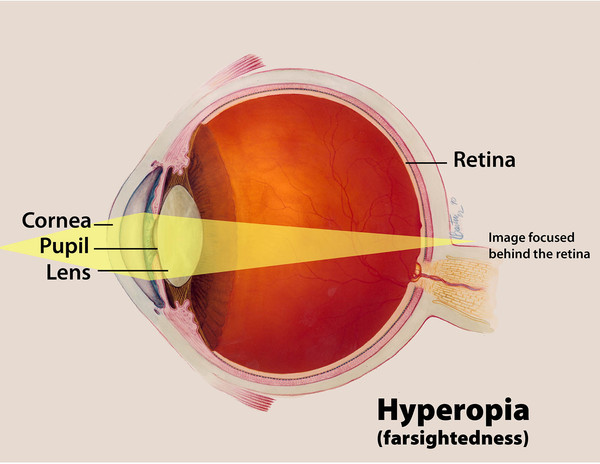