Familial HDL deficiency is a condition characterized by low levels of high-density lipoprotei% (HDL) in the blood. HDL is a molecule that transports cholesterol and certain fats called phospholipids through the bloodstream from the body's tissues to the liver. Once in the liver, cholesterol and phospholipids are redistributed to other tissues or removed from the body. HDL is often referred to as "good cholesterol" because high levels of this substance reduce the chances of developing heart and blood vessel (cardiovascular) disease. People with familial HDL deficiency may develop cardiovascular disease at a relatively young age, often before age 50.

Severely reduced levels of HDL in the blood is a characteristic feature of a related disorder called Tangier disease. People with Tangier disease have additional signs and symptoms, such as disturbances in nerve function; enlarged, orange-colored tonsils; and clouding of the clear covering of the eye (corneal clouding). However, people with familial HDL deficiency do not have these additional features.

Familial HDL deficiency is a rare disorder, although the prevalence is unknown.

Mutations in the ABCA1 gene or the APOA1 gene cause familial HDL deficiency. The proteins produced from these genes work together to remove cholesterol and phospholipids from cells.

The ABCA1 gene provides instructions for making a protein that removes cholesterol and phospholipids from cells by moving them across the cell membrane. The movement of these substances across the membrane is enhanced by another protein called apolipoprotein A-I (apoA-I), which is produced by the APOA1 gene. Once outside the cell, the cholesterol and phospholipids combine with apoA-I to form HDL. ApoA-I also triggers a reaction that converts cholesterol to a form that can be fully integrated into HDL and transported through the bloodstream.

Learn more about the genes associated with Familial HDL deficiency

Familial HDL deficiency is inherited in an autosomal dominant pattern

, which means an alteration in one copy of either the ABCA1 or the APOA1 gene in each cell is sufficient to cause the disorder. People with alterations in both copies of the ABCA1 gene develop the related disorder Tangier disease. 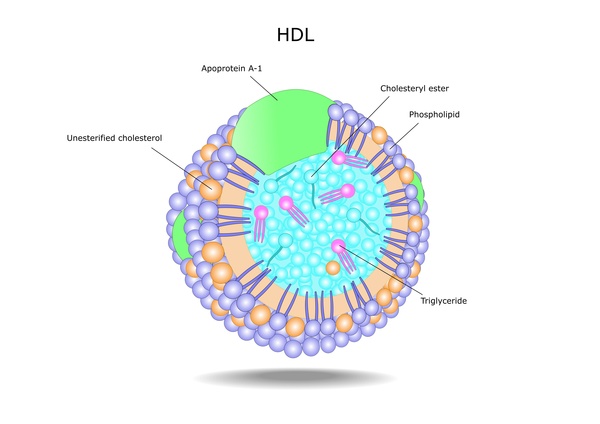