Familial atrial fibrillation is an inherited abnormality of the heart's normal rhythm. Atrial fibrillation is characterized by episodes of uncoordinated electrical activity (fibrillation) in the heart's upper chambers (the atria), which cause a fast and irregular heartbeat. If untreated, this abnormal heart rhythm (arrhythmia) can lead to dizziness, chest pain, a sensation of fluttering or pounding in the chest (palpitations), shortness of breath, or fainting (syncope). Atrial fibrillation also increases the risk of stroke and sudden death. Complications of atrial fibrillation can occur at any age, although some people with this heart condition never experience any health problems associated with the disorder.

Atrial fibrillation is the most common type of recurrent arrhythmia, affecting more than 3 million people in the United States. The risk of developing this irregular heart rhythm increases with age. The incidence of the familial form of atrial fibrillation is unknown; however, recent studies suggest that up to 30 percent of all people who have atrial fibrillation without an identified cause have a history of the condition in their family.

The first single gene found to be associated with familial atrial fibrillation was KCNQ1, which provides instructions for making a channel

that is embedded in the outer membrane

of heart (cardiac) muscle cells. This channel transports positively charged atoms (ions) of potassium out of cells. In cardiac muscle, this ion transport plays a critical role in maintaining the heart's normal rhythm. Since that discovery, rare genetic variants in other ion channel genes have been found to cause familial atrial fibrillation. Mutations in ion channel genes lead to the production of altered channels, which may either increase or decrease the flow of ions across the outer cell membrane and alter the way the heart beats.

Mutations in other types of genes have also been found to cause familial atrial fibrillation. Some of these genes provide instructions for making cardiac transcription factors, which regulate the activity of certain genes involved in the formation and development of the heart before birth. Other genes provide instructions for making parts of structural elements of cardiac muscle, such as sarcomeres. These structures are necessary for cardiac muscle to contract and produce the heart's pumping action. Mutations in these non-ion channel genes have a variety of effects on the structure and function of cardiac muscle, all of which can lead to an abnormal heartbeat.

Most cases of atrial fibrillation are not caused by inherited mutations in single genes. However, relatively common variations (polymorphisms) in more than two dozen genes appear to influence the likelihood of developing the condition. Each of these polymorphisms on its own has a small effect on a person's overall risk, but an individual may have multiple polymorphisms that together have a significant effect. In addition to these common genetic variations, risk factors for atrial fibrillation include high blood pressure (hypertension), diabetes mellitus, a previous stroke, or an accumulation of fatty deposits and scar-like tissue in the lining of the arteries (atherosclerosis

). Researchers are working to determine how a combination of genetic changes, environmental influences, and lifestyle factors contribute to a person's risk of developing atrial fibrillation.

Learn more about the genes associated with Familial atrial fibrillation

When familial atrial fibrillation is caused by mutations in a single gene (such as KCNQ1), it is inherited in an autosomal dominant pattern

. Autosomal dominant inheritance means that one copy of the altered gene in each cell is sufficient to cause the disorder. In these cases, an affected person inherits the mutation from a parent who has the condition. 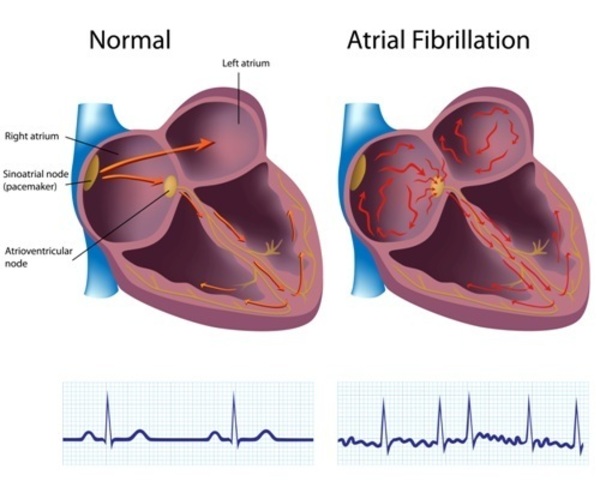