connecting the eyes and the brain are progressively damaged. This damage can lead to reduction in side (peripheral) vision and eventual blindness. Other signs and symptoms may include bulging eyes, excessive tearing, and abnormal sensitivity to light (photophobia). The term "early-onset glaucoma" may be used when the disorder appears before the age of 40.

Usually glaucoma develops in older adults, in whom the risk of developing the disorder may be affected by a variety of medical conditions including high blood pressure (hypertension) and diabetes mellitus, as well as family history. The risk of early-onset glaucoma depends mainly on heredity.

Structural abnormalities that impede fluid drainage in the eye

increase ocular pressure. These abnormalities may be present at birth and usually become apparent during the first year of life. Such structural abnormalities may be part of a genetic disorder that affects many body systems, called a syndrome. If glaucoma appears before the age of 3 without other associated abnormalities, it is called primary congenital glaucoma.

Approximately 10 percent to 33 percent of people with juvenile open-angle glaucoma have variants (also known as mutations) in the MYOC gene. MYOC gene variants have also been detected in some people with primary congenital glaucoma. The MYOC gene provides instructions for producing a protein called myocilin. Myocilin is found in certain structures of the eye

, called the trabecular meshwork and the ciliary body, that regulate the intraocular pressure.

Between 20 percent and 40 percent of people with primary congenital glaucoma have variants in the CYP1B1 gene. CYP1B1 gene variants have also been detected in some people with juvenile open-angle glaucoma. The CYP1B1 gene provides instructions for producing a form of the cytochrome P450 protein. Like myocilin, this protein is found in the trabecular meshwork, ciliary body, and other structures of the eye.

It is not well understood how defects in the CYP1B1 protein cause signs and symptoms of glaucoma. Recent studies suggest that the defects may interfere with the early development of the trabecular meshwork, the tissue that regulates the secretion of fluid inside the eye.

Unknown variants in other genes may also be involved in early-onset glaucoma.

Learn more about the genes associated with Early-onset glaucoma

, which means both copies of the gene in each cell have variants. Most often, the parents of an individual with an autosomal recessive condition each carry one copy of the altered gene, but do not show signs and symptoms of the condition.

Juvenile open-angle glaucoma is inherited in an autosomal dominant pattern

, which means one copy of the altered gene in each cell is sufficient to cause the disorder. In some families, primary congenital glaucoma may also be inherited in an autosomal dominant pattern. 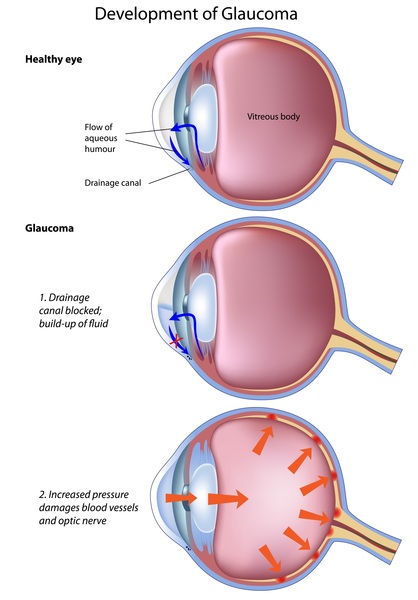