You Are Here:
Home →
Genetics →
Genetic Conditions →
Dementia with Lewy bodies
URL of this page: https://medlineplus.gov/genetics/condition/dementia-with-lewy-bodies/

Dementia with Lewy bodies is a nervous system disorder characterized by a decline in intellectual function (dementia), a group of movement problems known as parkinsonism, visual hallucinations, sudden changes (fluctuations) in behavior and intellectual ability, and acting out dreams while asleep (REM sleep behavior disorder). This condition typically affects older adults, most often developing between ages 50 and 85. The life expectancy of individuals with dementia with Lewy bodies varies; people typically survive about 5 to 7 years after they are diagnosed.

REM sleep behavior disorder may be the first sign of dementia with Lewy bodies. It can occur years before other symptoms appear. Individuals with REM sleep behavior disorder act out their dreams, talking and moving in their sleep when they should be still. This behavior becomes less pronounced as dementia with Lewy bodies worsens and additional features develop.

Dementia is often the second major feature to develop in dementia with Lewy bodies. Initially, this intellectual decline may be mild or seem to come and go. In this condition, dementia often leads to impaired ability to perform visual-spatial tasks such as assembling puzzles. Affected individuals may also have poor problem-solving skills (executive functioning), speech difficulties, and reduced inhibitions. Problems with memory typically do not occur until later.

Most people with dementia with Lewy bodies experience visual hallucinations, which often involve people or animals. Fluctuations in behavior and thought processes (cognition) include sudden changes in attention, unintelligible speech, and brief episodes of altered consciousness that may appear as staring spells.

Parkinsonism is usually the last major feature to develop in people with dementia with Lewy bodies, although it can appear earlier in some individuals. The movement problems typically include tremors, rigidity, unusually slow movement (bradykinesia), and impaired balance and coordination (postural instability). Affected individuals may require walking aids or wheelchair assistance over time.

Dementia with Lewy bodies is estimated to affect 1.4 million people in the United States. It accounts for about 5 percent of all dementia cases in older individuals and is the second most common dementia after Alzheimer disease.

Mutations in genes known as SNCA and SNCB can cause dementia with Lewy bodies. The SNCA and SNCB genes provide instructions for making proteins, called alpha-synuclein and beta-synuclein, respectively, that are found primarily in the brain. Alpha-synuclein plays a role in communication between nerve cells (neurons), helping to regulate the release of chemical messengers (neurotransmitters

). Beta-synuclein is likely involved in a process that allows neurons to change and adapt over time, which is necessary for learning and memory. Beta-synuclein may also prevent harmful accumulation of alpha-synuclein in neurons.

Mutations in another gene called GBA or a certain version of a gene called APOE increase the risk of developing the condition, but are not a direct cause. The enzyme produced from the GBA gene is found throughout the body in cell structures called lysosomes

that digest and recycle proteins and other materials that are no longer needed. The APOE gene provides instructions for making a protein, called apolipoprotein E, which packages cholesterol and other fats and carries them through the bloodstream.

In dementia with Lewy bodies, alpha-synuclein clusters accumulate inside and outside of neurons throughout the brain where they impair cell function and ultimately cause cell death. Neurons that produce the neurotransmitter dopamine seem to be particularly vulnerable to Lewy bodies. Dopamine has many important functions, including playing complex roles in cognition, motivation, behavior, and control of movement. Over time, the loss of dopamine-producing neurons can increasingly impair intellectual and motor function and the regulation of emotions, resulting in the signs and symptoms of dementia with Lewy bodies.

Learn more about the genes associated with Dementia with Lewy bodies

When dementia with Lewy bodies is caused by SNCA or SNCB gene mutations, it is inherited in an autosomal dominant pattern

, which means one copy of the altered gene in each cell is sufficient to cause the disorder. In these cases, an affected person usually has one parent with the condition. 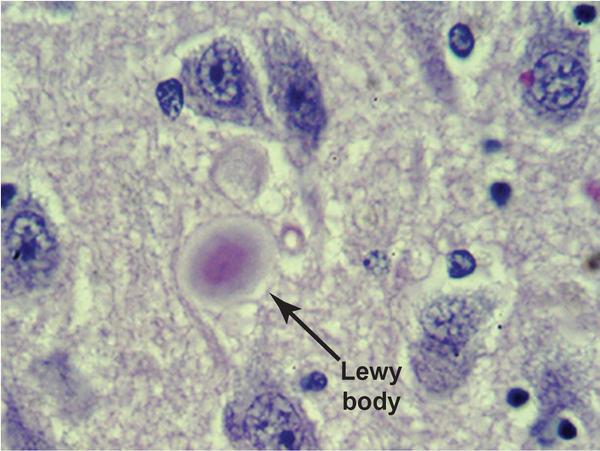