. This condition involves an abnormal immune response that causes excess inflammation. It most often affects the intestinal walls, particularly in the lower part of the small intestine (the ileum

) and portions of the large intestine (the colon

). However, inflammation can occur in any part of the digestive system, from the mouth to the anus. The inflamed tissues become thick and swollen

, and the inner surfaces of the digestive system may develop open sores (ulcers).

Crohn disease most commonly appears in a person's late teens or twenties, although the disease can begin at any age. Signs and symptoms tend to flare up multiple times throughout life. The most common features of this condition are persistent diarrhea, abdominal pain and cramping, loss of appetite, weight loss, and fever. Some people with Crohn disease have blood in the stool from inflamed tissues in the intestine; over time, chronic bleeding can lead to a low number of red blood cells (anemia

). In some cases, Crohn disease can also cause inflammation affecting the joints, eyes, or skin.

Crohn disease is most common in western Europe and North America, where it has a prevalence of 100 to 300 per 100,000 people. More than half a million Americans are currently affected by this disorder. Crohn disease occurs more often in people of northern European ancestry and those of eastern and central European (Ashkenazi) Jewish descent than among people of other ethnic backgrounds. For reasons that are not clear, the prevalence of Crohn disease has been increasing in the United States and some other parts of the world.

The causes of Crohn disease are complex. This condition results from a combination of genetic, environmental, and lifestyle factors, many of which are unknown.

Many of the major genes related to Crohn disease, including NOD2, ATG16L1, IL23R, and IRGM, are involved in immune system function. The proteins produced from these genes help the immune system sense and respond appropriately to bacteria in the lining of the digestive tract. Many of the proteins play roles in autophagy, which is a process that cells use to surround and destroy bacteria and viruses. Variations in these genes may disrupt autophagy or otherwise alter the immune system's response to bacteria in the digestive system. In combination with other genetic and environmental factors, these changes can lead to chronic inflammation and result in the digestive problems characteristic of Crohn disease.

Environmental and lifestyle factors likely have a large impact on Crohn disease risk. Studies have found that cigarette smoking doubles the likelihood of developing this disease, and it may also play a role in periodic flare-ups of signs and symptoms. Crohn disease is more prevalent in urbanized societies, suggesting that factors related to increased industrialization and sanitation also play a role. Additionally, certain aspects of a person's diet, including sugar, fats, and fiber, have been proposed to influence Crohn disease risk. Many of the potential lifestyle and environmental risk factors are probably related, directly or indirectly, to abnormal inflammation. However, the exact relationship between these factors and Crohn disease risk remains unclear.

Learn more about the genes associated with Crohn disease

The inheritance pattern of Crohn disease is unclear because many genetic and environmental factors are likely to be involved. However, Crohn disease tends to cluster in families; about 15 percent of affected people have a first-degree relative (such as a parent or sibling) with the disorder. 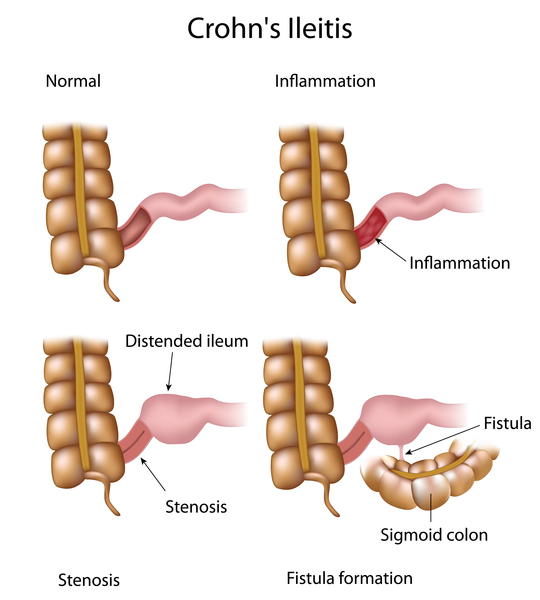