(cranium) and face before birth. Microsomia means abnormal smallness of body structures. Most people with craniofacial microsomia have differences in the size and shape of facial structures between the right and left sides of the face (facial asymmetry). In about two-thirds of cases, both sides of the face have abnormalities, which usually differ from one side to the other. Other individuals with craniofacial microsomia are affected on only one side of the face. The facial characteristics in craniofacial microsomia typically include underdevelopment of one side of the upper or lower jaw (maxillary or mandibular hypoplasia), which can cause dental problems and difficulties with feeding and speech. In cases of severe mandibular hypoplasia, breathing may also be affected.

People with craniofacial microsomia usually have ear abnormalities affecting one or both ears, typically to different degrees

. They may have growths of skin (skin tags) in front of the ear (preauricular tags), an underdeveloped or absent external ear (microtia

), or a closed or absent ear canal; these abnormalities may lead to hearing loss. Eye problems are less common in craniofacial microsomia, but some affected individuals have an unusually small eyeball (microphthalmia) or other eye abnormalities that result in vision loss.

Abnormalities in other parts of the body, such as malformed bones of the spine (vertebrae), abnormally shaped kidneys, and heart defects, may also occur in people with craniofacial microsomia.

Craniofacial microsomia has been estimated to occur in between 1 in 5,600 and 1 in 26,550 newborns. However, this range may be an underestimate because not all medical professionals agree on the criteria for diagnosis of this condition, and because mild cases may never come to medical attention. For reasons that are unclear, the disorder occurs about 50 percent more often in males than in females.

It is unclear what genes are involved in craniofacial microsomia. This condition results from problems in the development of structures in the embryo called the first

pharyngeal arches (also called branchial or visceral arches). Tissue layers in the six pairs of pharyngeal arches give rise to the muscles, arteries, nerves, and cartilage of the face and neck. Specifically, the first and second pharyngeal arches develop into the lower jaw, the nerves and muscles used for chewing and facial expression, the external ear

, and the bones of the middle ear. Interference with the normal development of these structures can result in the abnormalities characteristic of craniofacial microsomia.

There are several factors that can disrupt the normal development of the first and second pharyngeal arches and lead to craniofacial microsomia. Some individuals with this condition have chromosomal abnormalities such as deletions or duplications

of genetic material; these individuals often have additional developmental problems or malformations. Occasionally, craniofacial microsomia occurs in multiple members of a family in a pattern that suggests inheritance of a causative gene mutation, but the gene or genes involved are unknown. In other families, individuals seem to inherit a predisposition to the disorder. The risk of craniofacial microsomia can also be increased by environmental factors, such as certain drugs taken by the mother during pregnancy. In most affected individuals, the cause of the disorder is unknown.

It is not well understood why certain disruptions to development affect the first and second pharyngeal arches in particular. Researchers suggest that these structures may develop together in such a way that they respond as a unit to these disruptions.

Craniofacial microsomia most often occurs in a single individual in a family and is not inherited. If the condition is caused by a chromosomal abnormality, it may be inherited from one affected parent or it may result from a new abnormality in the chromosome and occur in people with no history of the disorder in their family.

In 1 to 2 percent of cases, craniofacial microsomia is inherited in an autosomal dominant pattern

, which means one copy of an altered gene in each cell is sufficient to cause the disorder. In rare cases, the condition is inherited in an autosomal recessive pattern

, which means both copies of a gene in each cell have mutations. The parents of an individual with an autosomal recessive condition each carry one copy of the mutated gene, but they typically do not show signs and symptoms of the condition. The gene or genes involved in craniofacial microsomia are unknown.

In some affected families, people seem to inherit an increased risk of developing craniofacial microsomia, not the condition itself. In these cases, some combination of genetic changes and environmental factors may be involved. 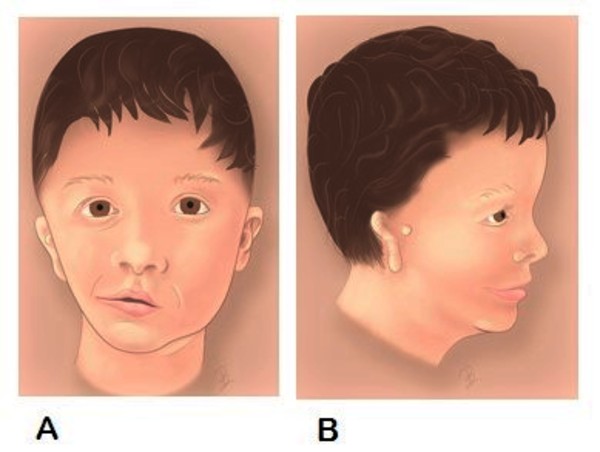