Cornelia de Lange syndrome is a developmental disorder that affects many parts of the body. The features of this disorder vary widely among affected individuals and range from relatively mild to severe.

Cornelia de Lange syndrome is characterized by slow growth before and after birth leading to short stature; intellectual disability that is usually moderate to severe; and abnormalities of bones in the arms, hands, and fingers

. Most people with Cornelia de Lange syndrome also have distinctive facial features, including arched eyebrows that often meet in the middle (synophrys

, low-set ears, small and widely spaced teeth, and a small and upturned nose. Many affected individuals also have behavior problems similar to autism, a developmental condition that affects communication and social interaction.

), hearing loss, and problems with the digestive tract

. Some people with this condition are born with an opening in the roof of the mouth called a cleft palate

. Seizures, heart defects, and eye problems have also been reported in people with this condition.

Cornelia de Lange syndrome can result from variants (also called mutations) in one of several genes. Variants in the NIPBL gene have been identified in more than half of all people with this condition. Variants in other genes, including SMC1A, HDAC8, RAD21, SMC3, and others, are much less common.

The proteins produced from most of the genes involved in Cornelia de Lange syndrome contribute to the structure or function of the cohesin complex, a group of proteins with an important role in directing development before birth. Within cells, the cohesin complex helps regulate the structure and organization of chromosomes, stabilize cells' genetic information, and repair damaged DNA. The cohesin complex also regulates the activity of certain genes that guide the development of the face, limbs, and other parts of the body. Other genes that are involved in rare cases of Cornelia de Lange syndrome also control gene activity and are likely important during development.

Variants in the NIPBL, SMC1A, HDAC8, RAD21, and SMC3 genes cause Cornelia de Lange syndrome by impairing the function of the cohesin complex, which disrupts gene regulation during critical stages of early development. Variants in other genes are also thought to disrupt the regulation of genes important for development.

The features of Cornelia de Lange syndrome vary widely, and the severity of the disorder can differ even in individuals with the same gene variant. Researchers suspect that additional genetic or environmental factors may be important for determining the specific signs and symptoms in each individual. In general, SMC1A, RAD21, and SMC3 gene variants cause milder signs and symptoms than NIPBL gene variants. Variants in the HDAC8 gene cause a somewhat different set of features, including delayed closure of the "soft spot" on the head (the anterior fontanelle) in infancy, widely spaced eyes

, and dental abnormalities. Like affected individuals with NIPBL gene variants, those with HDAC8 gene variants may have significant intellectual disability.

In about 15 percent of cases, the cause of Cornelia de Lange syndrome is unknown. Researchers are looking for additional changes in the known genes, as well as variants in other genes, that may cause this condition.

When Cornelia de Lange syndrome is caused by variants in the NIPBL, RAD21, or SMC3 gene, the condition is considered to have an autosomal dominant pattern

of inheritance. Autosomal dominant inheritance means one copy of the altered gene in each cell is sufficient to cause the disorder. Most cases result from new gene variants and occur in people with no history of the condition in their family.

When  Cornelia de Lange syndrome is caused by variants in the HDAC8 or SMC1A gene, the condition has an X-linked dominant pattern

of inheritance. A condition is considered X-linked if the altered gene that causes the disorder is located on the X chromosome, one of the two sex chromosomes

. Studies of X-linked Cornelia de Lange syndrome indicate that one copy of the altered gene in each cell may be sufficient to cause the condition. Affected females, who have two X chromosomes, may have milder signs and symptoms than affected males, who have only one X chromosome. Most X-linked cases result from new variants in the HDAC8 or SMC1A gene and occur in people with no history of the condition in their family. 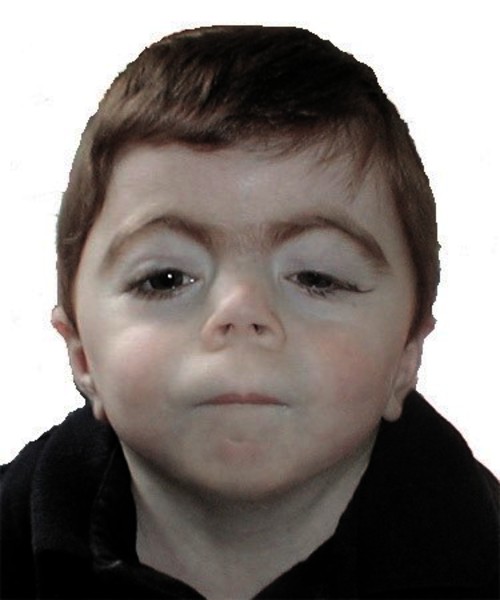