Congenital dyserythropoietic anemia (CDA) is an inherited blood disorder that affects the development of red blood cells. This disorder is one of many types of anemia

, which is a condition characterized by a shortage of red blood cells. This shortage prevents the blood from carrying an adequate supply of oxygen to the body's tissues. The resulting symptoms can include tiredness (fatigue), weakness, pale skin, and other complications.

Researchers have identified three major types of CDA: type I, type II, and type III. The types have different genetic causes and different but overlapping patterns of signs and symptoms.

CDA type I is characterized by moderate to severe anemia. It is usually diagnosed in childhood or adolescence, although in some cases, the condition can be detected before birth. Many affected individuals have yellowing of the skin and eyes (jaundice) and an enlarged liver and spleen (hepatosplenomegaly). This condition also causes the body to absorb too much iron, which builds up and can damage tissues and organs. In particular, iron overload can lead to an abnormal heart rhythm (arrhythmia), congestive heart failure, diabetes, and chronic liver disease (cirrhosis). Rarely, people with CDA type I are born with skeletal abnormalities, most often involving the fingers and/or toes.

The anemia associated with CDA type II can range from mild to severe, and most affected individuals have jaundice, hepatosplenomegaly, and the formation of hard deposits in the gallbladder called gallstones. This form of the disorder is usually diagnosed in adolescence or early adulthood. An abnormal buildup of iron typically occurs after age 20, leading to complications including heart disease, diabetes, and cirrhosis.

The signs and symptoms of CDA type III tend to be milder than those of the other types. Most affected individuals do not have hepatosplenomegaly, and iron does not build up in tissues and organs. In adulthood, abnormalities of a specialized tissue at the back of the eye (the retina

) can cause vision impairment. Some people with CDA type III also have a blood disorder known as monoclonal gammopathy, which can lead to a cancer of white blood cells (multiple myeloma).

Several other variants of CDA have been described, although they appear to be rare and not much is known about them. Once researchers discover the genetic causes of these variants, some of them may be grouped with the three major types of CDA.

Several hundred cases of CDA have been reported worldwide. CDA type II is the most common form of the disorder, with more than 300 reported cases. CDA type III is the rarest form; it has been described in only a few families from Sweden, Argentina, and the United States. The incidence of CDA type I is unknown. Because CDA is so rare and its signs and symptoms overlap with those of other disorders, many cases likely remain undiagnosed or are incorrectly diagnosed as other disorders.

CDA type II is caused by mutations in the SEC23B gene. This gene provides instructions for making a protein that is involved in the transport of other proteins within cells. During the development of red blood cells

, this protein may help ensure that proteins are transported to the areas where they are needed. Researchers are working to determine how mutations in the SEC23B gene lead to the signs and symptoms of CDA type II.

The genetic cause of CDA type III has not been identified. It likely results from mutations in a gene located on the long arm of chromosome 15 at a position designated 15q22. Researchers continue to search for the specific gene associated with this form of the condition.

Learn more about the genes associated with Congenital dyserythropoietic anemia

The inheritance pattern of CDA depends on the type of the disorder. CDA types I and II are inherited in an autosomal recessive pattern

, which means both copies of the associated gene in each cell have mutations. The parents of an individual with an autosomal recessive condition each carry one copy of the mutated gene, but they typically do not show signs and symptoms of the condition.

In several families, CDA type III appears to have an autosomal dominant pattern

of inheritance. Autosomal dominant inheritance means that one copy of the altered gene in each cell is sufficient to cause the disorder. In these families, affected individuals often have a parent and other relatives with the condition. 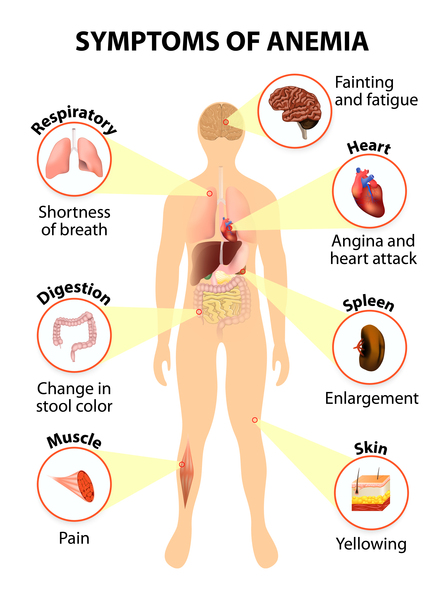