You Are Here:
Home →
Genetics →
Genetic Conditions →
Congenital bilateral absence of the vas deferens
URL of this page: https://medlineplus.gov/genetics/condition/congenital-bilateral-absence-of-the-vas-deferens/

Congenital bilateral absence of the vas deferens occurs in males when the tubes that carry sperm out of the testes (the vas deferens) fail to develop properly. Although the testes usually develop and function normally, sperm cannot be transported through the vas deferens to become part of semen. As a result, men with this condition are unable to father children (infertile) unless they use assisted reproductive technologies. This condition has not been reported to affect sex drive or sexual performance.

This condition is responsible for 1 percent to 2 percent of all infertility in men.

Mutations in the CFTR gene cause congenital bilateral absence of the vas deferens.

The protein made from the CFTR gene forms a channel that transports negatively charged particles called chloride ions into and out of cells. The flow of chloride ions helps control the movement of water in tissues, which is necessary for the production of thin, freely flowing mucus. Mucus is a slippery substance that lubricates and protects the linings of the airways, digestive system, reproductive system, and other organs and tissues.

Mutations in the CFTR gene disrupt the function of the chloride channels, preventing them from regulating the flow of chloride ions and water across cell membranes. As a result, cells in the male genital tract produce mucus that is abnormally thick and sticky. This mucus clogs the vas deferens as they are forming, causing them to deteriorate before birth.

In instances of congenital bilateral absence of the vas deferens without a mutation in the CFTR gene, the cause of this condition is often unknown. Some cases are associated with other structural problems of the urinary tract.

When this condition is caused by mutations in the CFTR gene, it is inherited in an autosomal recessive pattern

. This pattern of inheritance means that both copies of the gene in each cell have a mutation. Men with this condition who choose to father children through assisted reproduction have an increased risk of having a child with cystic fibrosis. If congenital absence of the vas deferens is not caused by mutations in CFTR, the risk of having children with cystic fibrosis is not increased. 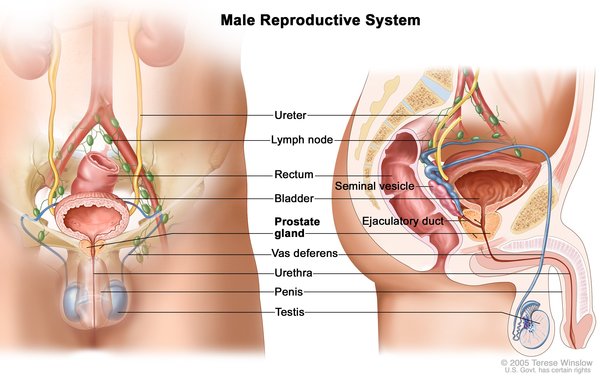