Cerebrotendinous xanthomatosis is a disorder characterized by abnormal storage of fats (lipids) in many areas of the body. People with this disorder cannot break down certain lipids effectively, specifically different forms of cholesterol, so these fats accumulate in the body in the form of fatty yellow nodules called xanthomas. These xanthomas are most commonly found in the brain and in connective tissue called tendons that attach muscle to bone, which is reflected in the condition name (cerebro- meaning brain and -tendinous referring to tendons).

People with cerebrotendinous xanthomatosis often develop neurological problems in early adulthood that are thought to be caused by an abnormal accumulation of fats and an increasing number of xanthomas in the brain. These neurological problems include recurrent seizures (epilepsy), movement disorders, impaired speech (dysarthria), loss of sensation in the arms and legs (peripheral neuropathy), decline in intellectual function (dementia), hallucinations, and depression. Xanthomas can accumulate in the fatty substance that insulates and protects nerves (myelin

), causing the destruction of myelin and disrupting nerve signaling in the brain. Degeneration (atrophy) of brain tissue caused by excess lipid deposits also contributes to the neurological problems.

Xanthomas in the tendons begin to form in early adulthood. The most common areas for xanthomas to develop are tendons in the hands, elbows, knees, neck, and in the Achilles tendon, which connects the heel of the foot to the calf muscles in the leg. Tendon xanthomas may cause discomfort and interfere with tendon flexibility. While many affected people develop tendon xanthomas, these nodules may not be easily visible underneath the skin.

) and chronic diarrhea in childhood; a reduced ability to produce and release a digestive fluid called bile (cholestasis), which can lead to a yellowing of the skin or whites of the eyes (jaundice); and progressively brittle bones that are prone to fracture (osteoporosis

The incidence of cerebrotendinous xanthomatosis is estimated to be 1 per million individuals worldwide. This condition is more common in the Moroccan Jewish population with an incidence of 1 in 108 individuals.

Mutations in the CYP27A1 gene cause cerebrotendinous xanthomatosis. The CYP27A1 gene provides instructions for producing an enzyme called sterol 27-hydroxylase. This enzyme works in the pathway that breaks down cholesterol to form acids used in the digestion of fats (bile acids), specifically a bile acid called chenodeoxycholic acid.

Mutations in the CYP27A1 gene lead to the production of a nonfunction or abnormal sterol 27-hydroxylase that cannot help form chenodeoxycholic acid. As a result, other molecules are formed by an alternative pathway. A molecule called cholestanol, which is similar to cholesterol, is produced as well as substances called bile alcohols. Cholestanol and bile alcohols are increased in the blood, while blood cholesterol levels are typically normal. In various tissues in the body, including the brain and heart, cholesterol and cholestanol levels are increased. These lipids make up much of the fats found in xanthomas. The accumulation of cholesterol and cholestanol throughout the body's tissues causes the signs and symptoms of cerebrotendinous xanthomatosis.

Learn more about the gene associated with Cerebrotendinous xanthomatosis 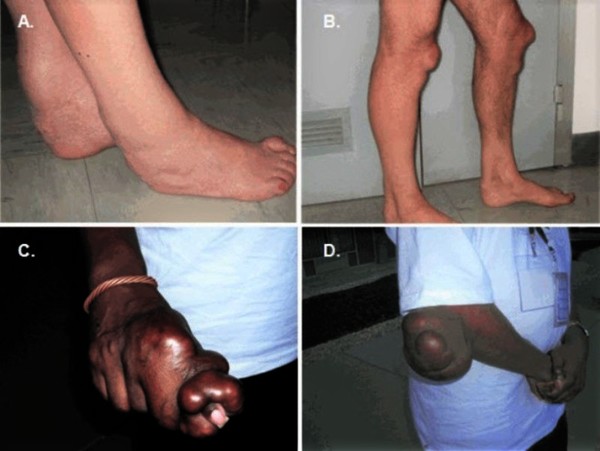