Carnitine palmitoyltransferase I (CPT I) deficiency is a condition that prevents the body from using certain fats for energy, particularly during periods without food (fasting). The severity of this condition varies among affected individuals.

Signs and symptoms of CPT I deficiency often appear during early childhood. Affected individuals usually have low blood sugar (hypoglycemia) and a low level of ketones, which are produced during the breakdown of fats and used for energy. Together these signs are called hypoketotic hypoglycemia. People with CPT I deficiency can also have an enlarged liver (hepatomegaly), liver malfunction, and elevated levels of carnitine in the blood. Carnitine, a natural substance acquired mostly through the diet, is used by cells to process fats and produce energy. Individuals with CPT I deficiency are at risk for nervous system damage, liver failure, seizures, coma, and sudden death.

CPT I deficiency is a rare disorder; fewer than 50 affected individuals have been identified. This disorder may be more common in the Hutterite and Inuit populations.

Mutations in the CPT1A gene cause CPT I deficiency. This gene provides instructions for making an enzyme called carnitine palmitoyltransferase 1A, which is found in the liver

. Carnitine palmitoyltransferase 1A is essential for fatty acid oxidation, which is the multistep process that breaks down (metabolizes) fats and converts them into energy. Fatty acid oxidation takes place within mitochondria

Mutations in the CPT1A gene severely reduce or eliminate the activity of carnitine palmitoyltransferase 1A. Without enough of this enzyme, carnitine is not attached to long-chain fatty acids. As a result, these fatty acids cannot enter mitochondria and be converted into energy. Reduced energy production can lead to some of the features of CPT I deficiency, such as hypoketotic hypoglycemia. Fatty acids may also build up in cells and damage the liver, heart, and brain. This abnormal buildup causes the other signs and symptoms of the disorder.

Learn more about the gene associated with Carnitine palmitoyltransferase I deficiency 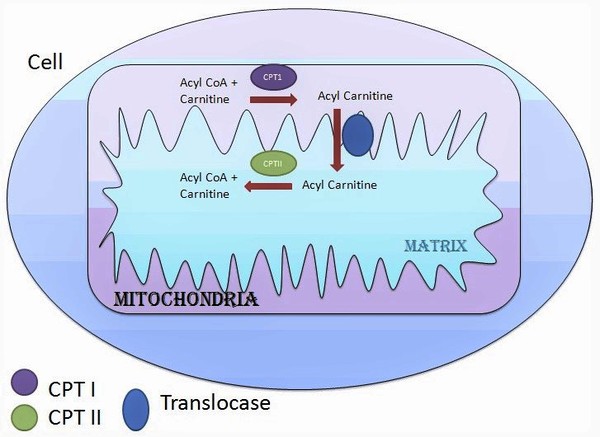