and increases the risk of certain types of tumors. Its signs and symptoms vary among affected individuals.

Birt-Hogg-Dubé syndrome is characterized by multiple noncancerous (benign) skin tumors, particularly on the face, neck, and upper chest. These growths typically first appear in a person's twenties or thirties and become larger and more numerous over time. Affected individuals also have an increased chance of developing cysts in the lungs and an abnormal accumulation of air in the chest cavity (pneumothorax) that may result in the collapse of a lung. Additionally, Birt-Hogg-Dubé syndrome is associated with an elevated risk of developing cancerous or noncancerous kidney tumors. Other types of cancer have also been reported in affected individuals, but it is unclear whether these tumors are actually a feature of Birt-Hogg-Dubé syndrome.

Birt-Hogg-Dubé syndrome is rare; its exact incidence is unknown. This condition has been reported in more than 400 families.

Mutations in the FLCN gene cause Birt-Hogg-Dubé syndrome. This gene provides instructions for making a protein called folliculin. The normal function of this protein is unknown, but researchers believe that it may act as a tumor suppressor. Tumor suppressors prevent cells from growing and dividing too rapidly or in an uncontrolled way. Mutations in the FLCN gene may interfere with the ability of folliculin to restrain cell growth and division, leading to uncontrolled cell growth

and the formation of noncancerous and cancerous tumors. Researchers have not determined how FLCN mutations increase the risk of lung problems, such as pneumothorax.

Learn more about the gene associated with Birt-Hogg-Dubé syndrome

This condition is inherited in an autosomal dominant pattern, which means one copy of the altered FLCN gene in each cell is sufficient to cause the disorder. In most cases, an affected person inherits the mutation from one affected parent

. Less commonly, the condition results from a new mutation

in the gene and occurs in people with no history of the disorder in their family.

Having a single mutated copy of the FLCN gene in each cell is enough to cause the skin tumors and lung problems associated with Birt-Hogg-Dubé syndrome. However, both copies of the FLCN gene are often mutated in the kidney tumors that occur with this condition. One of the mutations is inherited from a parent, while the other occurs by chance

in a kidney cell during a person's lifetime. These genetic changes disable both copies of the FLCN gene, which allows kidney cells to divide uncontrollably and form tumors. 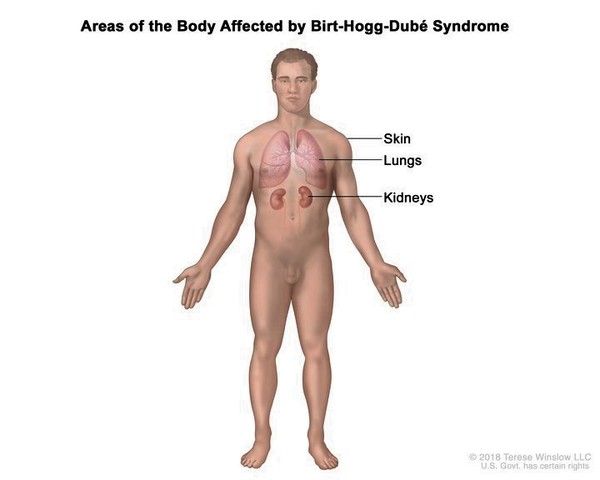