Anonychia congenita is a condition that affects the fingernails and toenails. Individuals with this condition are typically missing all of their fingernails and toenails (anonychia). This absence of nails is noticeable from birth (congenital). In some cases, only part of the nail is missing (hyponychia) or not all fingers and toes are affected. All of the other tissues at the tips of the fingers and toes, including structures that usually support the nail and its growth (such as the nail bed), are normal.

Individuals with anonychia congenita do not have any other health problems related to the condition.

Anonychia congenita is a rare condition; its prevalence is unknown.

Mutations in the RSPO4 gene cause anonychia congenita. The RSPO4 gene provides instructions for making a protein called R-spondin-4. R-spondin-4 plays a role in the Wnt signaling pathway

, a series of steps that affect the way cells and tissues develop. Wnt signaling is important for cell division, attachment of cells to one another (adhesion), cell movement (migration), and many other cellular activities. During early development, Wnt signaling plays a critical role in the growth and development of nails. R-spondin-4 is active in the skeleton and contributes to limb formation, particularly at the ends of the fingers and toes where nail development occurs.

RSPO4 gene mutations lead to the production of a protein with little or no function. As a result, R-spondin-4 cannot participate in the Wnt signaling pathway and nails develop improperly or not at all.

Anonychia congenita can also be part of syndromes that affect multiple parts of the body, including Coffin-Siris syndrome and nail-patella syndrome. When anonychia congenita is part of a syndrome, it is caused by mutations in the gene associated with that syndrome.

Learn more about the gene associated with Anonychia congenita 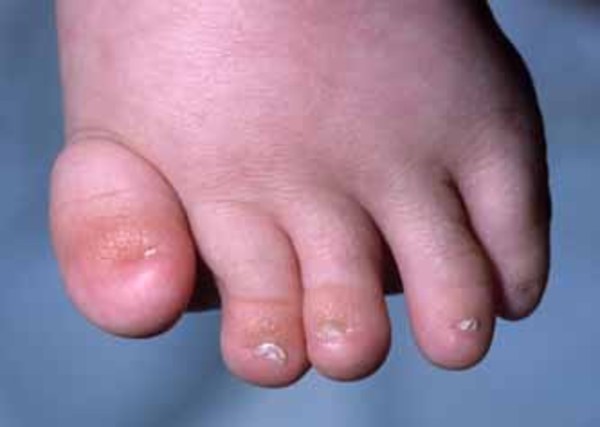