Coffin-Siris syndrome is a condition that affects several body systems. Although there are many variable signs and symptoms, hallmarks of this condition include developmental disability, abnormalities of the fifth (pinky) fingers or toes, and characteristic facial features.

Most affected individuals have mild to severe intellectual disability or delayed development of speech and motor skills such as sitting and walking. Another feature of Coffin-Siris syndrome is underdevelopment (hypoplasia) of the tips of the fingers or toes, or hypoplasia or absence of the nails. These abnormalities are most common on the fifth fingers or toes.

In addition, most people with Coffin-Siris syndrome have facial features described as coarse. These features typically include a wide nose with a flat nasal bridge, a wide mouth with thick lips, and thick eyebrows and eyelashes. Affected individuals can have excess hair on other parts of the face and body (hirsutism), but scalp hair is often sparse. People with Coffin-Siris syndrome can have a range of facial features, and not all affected individuals have the typical features. In addition, people with this condition may have an abnormally small head (microcephaly

Additionally, some infants and children with Coffin-Siris syndrome have frequent respiratory infections, difficulty feeding, and an inability to gain weight at the expected rate (failure to thrive). Other signs and symptoms that may occur in people with this condition include short stature, low muscle tone (hypotonia), and abnormally loose (lax) joints. Abnormalities of the eyes, brain, heart, and kidneys may also be present.

Coffin-Siris syndrome is a rare condition that, for unknown reasons, is diagnosed in females more frequently than in males. Approximately 200 cases have been reported in the medical literature.

The above genes are involved in controlling the activity (expression) of other genes. The ARID1A, ARID1B, SMARCA4, SMARCB1, and SMARCE1 genes, as well as some of the genes involved in rare cases of Coffiin-Siris syndrome, provide instructions for making single pieces (subunits) of several different SWI/SNF protein complexes. SWI/SNF complexes regulate gene expression by a process known as chromatin remodeling. Chromatin

is the network of DNA and protein that packages DNA into chromosomes. The structure of chromatin can be changed (remodeled) to alter how tightly regions of DNA are packaged. Chromatin remodeling is one way gene expression is regulated during development; when DNA is tightly packed, gene expression is often lower than when DNA is loosely packed.

Through their ability to regulate gene activity by remodeling chromatin, SWI/SNF complexes are involved in many processes, including repairing damaged DNA; copying (replicating) DNA; and controlling the growth, division, and maturation (differentiation) of cells.

Although it is unclear what effect variants in the ARID1A, ARID1B, SMARCA4, SMARCB1, or SMARCE1 gene have on SWI/SNF complexes, researchers suggest that the variants result in abnormal chromatin remodeling. Disturbance of this process alters the activity of many genes and disrupts several cellular processes, which could explain the diverse signs and symptoms of Coffin-Siris syndrome.

Research suggests that the SOX11 gene, another gene associated with Coffin-Siris syndrome, is one of many genes regulated by SWI/SNF complexes. The protein produced from this gene acts as a transcription factor, which means it attaches (binds) to specific regions of DNA and helps control the activity of particular genes. Other genes involved in rare cases of Coffin-Siris syndrome also provide instructions for making proteins that act as transcription factors.

The SOX11 protein is particularly important for development of the brain and differentiation of nerve cells (neurons). SOX11 gene variants disrupt the ability of the SOX11 protein to control gene activity, which is thought to alter development of the brain, neurons, and possibly other tissues, leading to intellectual disability and other signs and symptoms of Coffin-Siris syndrome.

Learn more about the genes associated with Coffin-Siris syndrome

Coffin-Siris syndrome appears to follow an autosomal dominant pattern of inheritance, which means one copy of the altered gene in each cell is sufficient to cause the disorder. However, the condition is not usually inherited from an affected parent, but occurs from new (de novo) variants

in the gene that likely occur during early embryonic development. 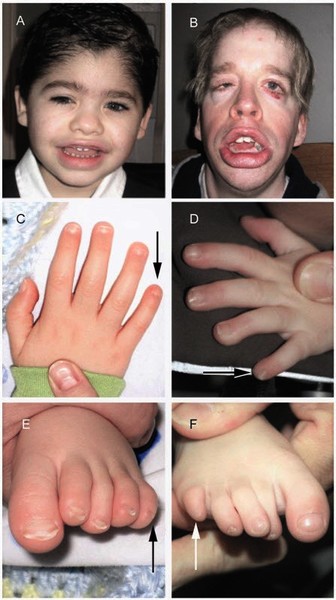