.  Early symptoms of ankylosing spondylitis typically begin between the ages of 15 and 30. Most commonly, affected individuals first experience chronic back pain and stiffness. This pain worsens with rest or inactivity, and tends to be relieved with physical activity or exercise.

Pain in ankylosing spondylitis results from inflammation of the joints between the pelvic bones (the ilia) and the base of the spine (the sacrum). These joints are called sacroiliac joints, and inflammation of these joints is known as sacroiliitis. The inflammation gradually spreads to the joints between the vertebrae, eventually involving the whole spine, causing a condition called spondylitis. Over time, back movement gradually becomes limited as the bones of the spine (vertebrae) fuse together. This progressive bony fusion is called ankylosis. These fused bones are prone to fracture.

Ankylosing spondylitis can involve other joints as well, including the shoulders, hips, and, less often, the knees. As the disease progresses, it can affect the joints between the spine and ribs, restricting movement of the chest and making it difficult to breathe deeply.

Ankylosing spondylitis is likely caused by a combination of genetic and environmental factors, most of which have not been identified. However, researchers have found variations in several genes that influence the risk of developing this disorder.

The HLA-B gene provides instructions for making a protein that plays an important role in the immune system. The HLA-B gene is part of a family of genes called the human leukocyte antigen (HLA) complex

. The HLA complex helps the immune system distinguish the body's own proteins from proteins made by foreign invaders (such as viruses and bacteria). The HLA-B gene has many different normal variations, allowing each person's immune system to react to a wide range of foreign proteins. A normal variant of the HLA-B gene called HLA-B27 significantly increases the risk of developing ankylosing spondylitis. Although some people with ankylosing spondylitis have the HLA-B27 variant, most people with this version of the HLA-B gene never develop the disorder. (Conversely, this condition can occur in people without the HLA-B27 gene variant.) It is not fully known how HLA-B27 increases the risk of developing ankylosing spondylitis.

Learn more about the genes associated with Ankylosing spondylitis 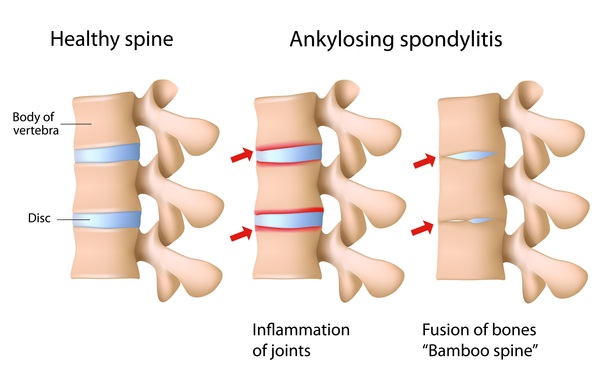