You Are Here:
Home →
Genetics →
Genetic Conditions →
Anencephaly
URL of this page: https://medlineplus.gov/genetics/condition/anencephaly/

Because the neural tube fails to close properly, the developing brain and spinal cord are exposed to the amniotic fluid that surrounds the fetus in the womb. This exposure causes the nervous system tissue to break down (degenerate). As a result, people with anencephaly are missing large parts of the brain

called the cerebrum and cerebellum. These brain regions are necessary for thinking, hearing, vision, emotion, and coordinating movement. The bones of the skull are also missing or incompletely formed.

Because these nervous system abnormalities are so severe, almost all babies with anencephaly die before birth or within a few hours or days after birth.

Anencephaly is one of the most common types of neural tube defect, affecting about 1 in 1,000 pregnancies. However, most of these pregnancies end in miscarriage, so the prevalence of this condition in newborns is much lower. An estimated 1 in 10,000 infants in the United States is born with anencephaly.

Anencephaly is a complex condition that is likely caused by the interaction of multiple genetic and environmental factors. Some of these factors have been identified, but many remain unknown.

Changes in dozens of genes in individuals with anencephaly and in their mothers may influence the risk of developing this type of neural tube defect. The best-studied of these genes is MTHFR, which provides instructions for making a protein that is involved in processing the vitamin folate (also called vitamin B9). While a shortage (deficiency) of this vitamin is an established risk factor for neural tube defects, there are many factors that can contribute to folate deficiency. Changes in other genes related to folate processing and genes involved in the development of the neural tube have also been studied as potential risk factors for anencephaly. However, no genes appear to play a major role in causing the condition.

Researchers have also examined environmental factors that could contribute to the risk of anencephaly. Folate deficiency plays a significant role. Studies have shown that women who take supplements containing folic acid (the synthetic form of folate) before they get pregnant and very early in their pregnancy are significantly less likely to have a baby with a neural tube defect, including anencephaly. Other possible maternal risk factors for anencephaly include diabetes mellitus, obesity, exposure to high heat (such as a fever or use of a hot tub or sauna) in early pregnancy, and the use of certain anti-seizure medications during pregnancy. However, it is unclear how these factors may influence the risk of anencephaly.

Learn more about the gene associated with Anencephaly

Most cases of anencephaly are sporadic, which means they occur in people with no history of the disorder in their family. A small percentage of cases have been reported to run in families; however, the condition does not have a clear pattern of inheritance. For parents who have had a child with anencephaly, the risk of having another affected child is increased compared with the risk in the general population. 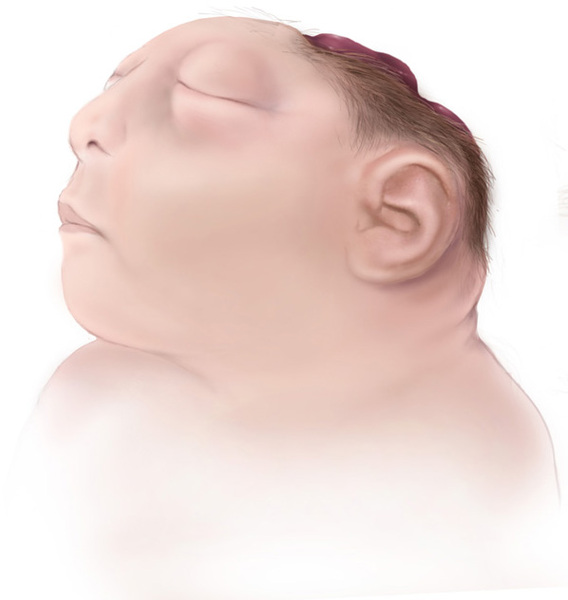