. Hemoglobin is the protein in red blood cells that carries oxygen to cells throughout the body.

In people with the characteristic features of alpha thalassemia, a reduction in the amount of hemoglobin prevents enough oxygen from reaching the body's tissues. Affected individuals also have a shortage of red blood cells (anemia

), which can cause pale skin, weakness, fatigue, and more serious complications.

Hb Bart syndrome is characterized by hydrops fetalis, a condition in which excess fluid builds up in the body before birth. Additional signs and symptoms can include severe anemia, an enlarged liver and spleen (hepatosplenomegaly), heart defects, and abnormalities of the urinary system or genitalia. Without treatment, most babies with this condition are stillborn or die soon after birth because of these serious health problems. Hb Bart syndrome can also cause serious complications for women during pregnancy, including dangerously high blood pressure with swelling (preeclampsia), premature delivery, and abnormal bleeding.

HbH disease causes mild to moderate anemia, hepatosplenomegaly, and yellowing of the eyes and skin (jaundice). The features of HbH disease usually appear in early childhood, and affected individuals typically live into adulthood.

Alpha thalassemia typically results from deletions involving the HBA1 and HBA2 genes. Less commonly, changes to the DNA sequence in or near these genes cause alpha thalassemia. Such changes are often referred to as nondeletion variants. Both the HBA1 and HBA2 genes provide instructions for making a protein called alpha-globin, which is a component (subunit) of hemoglobin

People have two copies of the HBA1 gene and two copies of the HBA2 gene in each cell. Each copy is called an allele. For each gene, one allele is inherited from a person's father, and the other is inherited from a person's mother. As a result, there are four alleles that produce alpha-globin. The different types of alpha thalassemia result from the loss or alteration of some or all of these alleles.

Hb Bart syndrome, the most severe form of alpha thalassemia, results from the loss or alteration of all four alpha-globin alleles. Such changes prevent the production of any normal alpha-globin.

and the other serious health problems associated with alpha thalassemia.

Nondeletion variants in one or two alleles cause a range of conditions, from alpha thalassemia silent carrier to HbH disease, depending on the allele involved.

Learn more about the genes associated with Alpha thalassemia

The inheritance of alpha thalassemia is complex. Each person inherits two alpha-globin alleles from each parent. If both parents are missing at least one alpha-globin allele, their children are at risk of having Hb Bart syndrome, HbH disease, or alpha thalassemia trait. The precise risk depends on how many alleles are missing and which combination of the HBA1 and HBA2 genes is affected. 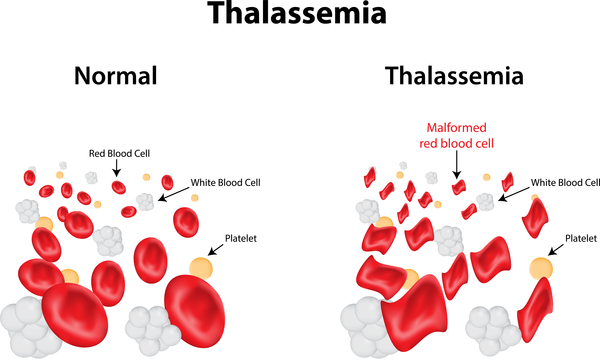