Aicardi-Goutières syndrome is a disorder that mainly affects the brain, the immune system, and the skin.

Most newborns with Aicardi-Goutières syndrome do not show any signs or symptoms of the disorder. However, about 20 percent are born with a combination of features that include an enlarged liver and spleen (hepatosplenomegaly), elevated blood levels of liver enzymes, a shortage of blood cells called platelets that are needed for normal blood clotting (thrombocytopenia), and neurological abnormalities. While this combination of signs and symptoms is typically associated with the immune system's response to a viral infection that is present at birth (congenital), no actual infection is found in these infants. For this reason, Aicardi-Goutières syndrome is sometimes referred to as a "mimic of congenital infection."

Within the first year of life, most individuals with Aicardi-Goutières syndrome experience an episode of severe brain dysfunction (encephalopathy), typically lasting for several months. During this encephalopathic phase of the disorder, affected babies are usually extremely irritable and do not feed well. They may develop intermittent fevers in the absence of infection (sterile pyrexias) and may have seizures. They stop developing new skills and begin losing skills they had already acquired (developmental regression). Growth of the brain and skull slows down, resulting in an abnormally small head size (microcephaly

). In this phase of the disorder, white blood cells and other immune system molecules associated with inflammation can be detected in the cerebrospinal fluid

, which is the fluid that surrounds the brain and spinal cord (central nervous system). These abnormal findings are consistent with inflammation and tissue damage

in the central nervous system.

The encephalopathic phase of Aicardi-Goutières syndrome causes permanent neurological damage that is usually severe. Medical imaging reveals loss of white matter in the brain (leukodystrophy). White matter consists of nerve fibers covered by myelin, which is a substance that protects nerves and insures rapid transmission of nerve impulses. Affected individuals also have abnormal deposits of calcium (calcification) in the brain. As a result of this neurological damage, most people with Aicardi-Goutières syndrome have profound intellectual disability. They also have muscle stiffness (spasticity); involuntary tensing of various muscles (dystonia), especially those in the arms; and weak muscle tone (hypotonia) in the torso.

Some people with Aicardi-Goutières syndrome have features characteristic of autoimmune disorders, which occur when the immune system malfunctions and attacks the body's own systems and organs. Some of these features overlap with those of another disorder called systemic lupus erythematosus (SLE). A feature of SLE that also occurs in about 40 percent of people with Aicardi-Goutières syndrome is a skin problem called chilblains. Chilblains are painful, itchy skin lesions that are puffy and red, and usually appear on the fingers, toes, and ears. They are caused by inflammation of small blood vessels, and may be brought on or made worse by exposure to cold. Vision problems, joint stiffness, and mouth ulcers are other features that can occur in both disorders.

Aicardi-Goutières syndrome is a rare disorder. Its exact prevalence is unknown.

Mutations in several genes can cause Aicardi-Goutières syndrome. Several of these genes, the TREX1, RNASEH2A, RNASEH2B, and RNASEH2C genes, provide instructions for making nucleases, which are enzymes that help break down molecules of DNA and its chemical cousin RNA when they are no longer needed. These DNA and RNA molecules or fragments may be generated during the first stage of protein production (transcription

), copying (replication) of cells' genetic material in preparation for cell division, DNA repair, cell death (apoptosis), and other processes. Mutations in any of these genes are believed to result the absence or abnormal functioning of the respective nuclease enzyme. Researchers suggest that absent or impaired enzyme function may result in the accumulation of unneeded DNA and RNA in cells. The unneeded DNA and RNA may be mistaken by cells for the genetic material of viral invaders, triggering immune system reactions in multiple body systems that result in encephalopathy, skin lesions, and other signs and symptoms of Aicardi-Goutières syndrome.

Mutations in other genes, including the SAMHD1, IFIH1, and ADAR genes, can also cause Aicardi-Goutières syndrome. These genes provide instructions for making proteins that are involved in the immune system. Mutations in these genes cause inappropriate activation of the body's immune response, resulting in inflammatory damage to the brain, skin, and other body systems that lead to the characteristic features of Aicardi-Goutières syndrome.

Learn more about the genes associated with Aicardi-Goutières syndrome

Aicardi-Goutières syndrome can have different inheritance patterns. In most cases caused by mutations in the ADAR, TREX1, RNASEH2A, RNASEH2B, RNASEH2C, and SAMHD1 genes, it is inherited in an autosomal recessive pattern

, which means one copy of the altered gene in each cell is sufficient to cause the disorder. These cases result from new mutations in the gene and occur in people with no history of the disorder in their family. 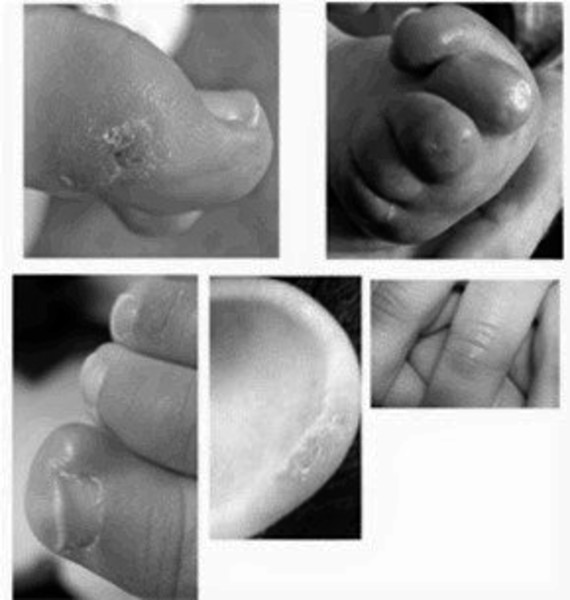