Acute promyelocytic leukemia is a form of acute myeloid leukemia, a cancer of the blood-forming tissue (bone marrow

. In acute promyelocytic leukemia, immature white blood cells called promyelocytes accumulate in the bone marrow. The overgrowth of promyelocytes leads to a shortage of normal white and red blood cells and platelets in the body, which causes many of the signs and symptoms of the condition.

People with acute promyelocytic leukemia are especially susceptible to developing bruises, small red dots under the skin (petechiae), nosebleeds, bleeding from the gums, blood in the urine (hematuria), or excessive menstrual bleeding. The abnormal bleeding and bruising occur in part because of the low number of platelets in the blood (thrombocytopenia) and also because the cancerous cells release substances that cause excessive bleeding.

The low number of red blood cells (anemia) can cause people with acute promyelocytic leukemia to have pale skin (pallor) or excessive tiredness (fatigue). In addition, affected individuals may heal slowly from injuries or have frequent infections due to the loss of normal white blood cells that fight infection. Furthermore, the leukemic cells can spread to the bones and joints, which may cause pain in those areas. Other general signs and symptoms may occur as well, such as fever, loss of appetite, and weight loss.

Acute promyelocytic leukemia is most often diagnosed around age 40, although it can be diagnosed at any age.

The mutation that causes acute promyelocytic leukemia involves two genes, the PML gene on chromosome 15 and the RARA gene on chromosome 17. A rearrangement of genetic material (translocation) between chromosomes 15 and 17, written as t(15;17), fuses part of the PML gene with part of the RARA gene. The protein produced from this fused gene is known as PML-RARα. This mutation is acquired during a person's lifetime and is present only in certain cells. This type of genetic change, called a somatic mutation, is not inherited.

The PML-RARα protein functions differently than the protein products of the normal PML and RARA genes. The protein produced from the RARA gene, RARα, is involved in the regulation of gene transcription

, which is the first step in protein production. Specifically, this protein helps control the transcription of certain genes important in the maturation (differentiation) of white blood cells beyond the promyelocyte stage. The protein produced from the PML gene acts as a tumor suppressor, which means it prevents cells from growing and dividing too rapidly or in an uncontrolled way. The PML-RARα protein interferes with the normal function of both the PML and the RARα proteins. As a result, blood cells are stuck at the promyelocyte stage, and they proliferate abnormally. Excess promyelocytes accumulate in the bone marrow and normal white blood cells cannot form, leading to acute promyelocytic leukemia.

Acute promyelocytic leukemia is not inherited but arises from a translocation in the body's cells that occurs after conception. 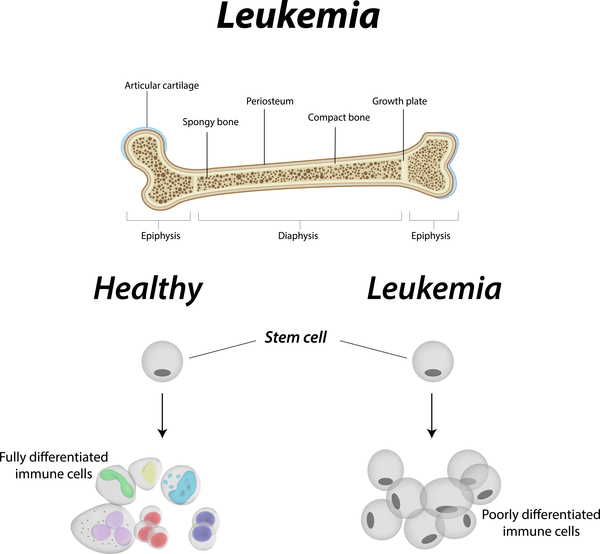