Poor muscle tone (hypotonia) is common in individuals with dup15q syndrome and contributes to delayed development and impairment of motor skills, including sitting and walking. Most affected children develop the ability to walk independently after age 2 or 3, and they typically have a wide-based or uncoordinated (ataxic) pattern of walking (gait). Babies with dup15q syndrome often have trouble feeding due to weak facial muscles that impair sucking and swallowing.

Intellectual disability also occurs in people with dup15q syndrome and can range from mild to profound; however, it is usually in the moderate to severe range. Speech and language development are particularly affected, with some individuals never developing functional speech. Most individuals with this disorder have autism spectrum disorder (ASD), and many have language problems associated with ASD such as repeating the words of others (echolalia) or repeating particular phrases (stereotypical utterances).

Behavioral difficulties are also associated with dup15q syndrome, including other features of ASD such as difficulty with changes in routine and problems with social interaction. Affected individuals may also experience hyperactivity, anxiety, and frustration leading to tantrums. Mood disorders and psychosis occur in some affected individuals.

, which affect one part of the brain and usually do not cause a loss of consciousness. In other affected individuals, seizures begin with a type called infantile spasms (seizures that usually appear before the age of 1 and involve recurrent muscle contractions) and later include other types of seizures. In addition to focal seizures, these can include rapid uncontrolled muscle jerks (myotonic seizures); tonic-clonic (also called grand mal) seizures, which involve rigidity, convulsions, and loss of consciousness; and absence (also known as petit mal) seizures, which are brief episodes of impaired consciousness that look like staring spells. Affected individuals may develop complex, difficult-to-treat (intractable) seizure patterns such as Lennox-Gastaut syndrome. Seizures can lead to falls, loss of developmental milestones (developmental regression), and in a small minority of cases, sudden death during sleep (called sudden unexpected death in epilepsy, or SUDEP).

. This hearing loss is often temporary. However, if ear infections are left untreated during early childhood, the hearing loss can interfere with language development and worsen the speech problems associated with dup15q syndrome.

About 30 percent of individuals with dup15q syndrome are born with eyes that do not look in the same direction (strabismus). Other unusual facial features that can occur in this condition include a low forehead; outside corners of the eyes that point downward (downslanting palpebral fissures)

; a flattened nasal bridge with a short, upturned nose; nostrils that open to the front rather than downward (anteverted nares

); a long space between the nose and the upper lip (philtrum

); a high-arched roof of the mouth (palate)

; full lips; low-set ears; and a flat back of the head (occiput

). These features are typically subtle and may not be noticed during infancy.

Other problems associated with dup15q syndrome in some affected individuals include a reduced ability to feel pain; a spine that curves to the side (scoliosis

The prevalence of dup15q syndrome is unknown. It may be as high as 1 in 5,000 individuals in the general population and is thought to be about 10 times more common in people with ASD or intellectual disability.

Dup15q syndrome is caused by chromosome abnormalities that result in at least one extra copy of a region of chromosome 15 called 15q11.2-q13.1. In particular, the condition arises only if the chromosome abnormality occurs on the copy of the chromosome inherited from the mother (the maternal copy). People normally inherit one copy of chromosome 15 from each parent. However, some genes on this chromosome, including some of those in the 15q11.2-q13.1 region, are turned on (active) only on the maternal copy. This parent-specific gene activation results from a phenomenon called genomic imprinting.

In about 20 percent of cases of dup15q syndrome, the duplication occurs on the long (q) arm of one of the two copies of chromosome 15 in each cell; this situation is called an interstitial duplication

. In these cases, cells have two copies of chromosome 15, one of which has an extra copy of the segment of genetic material, for a total of three copies of the duplicated segment.

In all cases of dup15q syndrome, the duplicated genetic material results in extra copies of certain genes involved in development. This extra genetic material disrupts normal development, causing the characteristic features of this disorder. People with dup15q syndrome resulting from an interstitial duplication often have milder signs and symptoms than those in whom the disorder results from an isodicentric chromosome 15.

Learn more about the chromosome associated with 15q11-q13 duplication syndrome

In 15 percent of cases of dup15q syndrome caused by an interstitial duplication, the condition is inherited from a mother who also has the duplication. The remainder of cases are caused by de novo duplication of the genetic material. 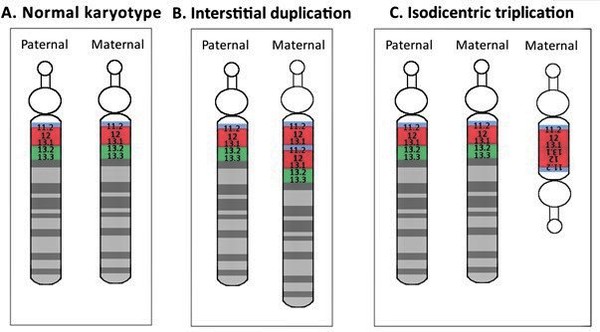