, which is the protein that carries oxygen in the blood. People with X-linked sideroblastic anemia and ataxia have mature red blood cells that are smaller than normal (microcytic) and appear pale (hypochromic) because of the shortage of hemoglobin. This disorder also leads to an abnormal accumulation of iron in red blood cells. The iron-loaded erythroblasts, which are present in bone marrow

is typically mild and usually does not cause any symptoms.

X-linked sideroblastic anemia and ataxia causes problems with balance and coordination that appear early in life. The ataxia primarily affects the trunk, making it difficult to sit, stand, and walk unassisted. In addition to ataxia, people with this condition often have trouble coordinating movements that involve judging distance or scale (dysmetria) and find it difficult to make rapid, alternating movements (dysdiadochokinesis). Mild speech difficulties (dysarthria), tremor, and abnormal eye movements have also been reported in some affected individuals.

X-linked sideroblastic anemia and ataxia is a rare disorder; only a few affected families have been reported.

Mutations in the ABCB7 gene cause X-linked sideroblastic anemia and ataxia. The ABCB7 gene provides instructions for making a protein that is critical for heme production. Heme

is a component of the hemoglobin

protein, which is vital for supplying oxygen to the entire body. The ABCB7 protein also plays a role in the formation of certain proteins containing clusters of iron and sulfur atoms. Overall, researchers believe that the ABCB7 protein helps maintain an appropriate balance of iron (iron homeostasis) in developing red blood cells.

ABCB7 mutations slightly alter the structure of the ABCB7 protein, disrupting its usual role in heme production and iron homeostasis

results when heme cannot be produced normally, and therefore not enough hemoglobin is made. It is unclear how changes in the ABCB7 gene lead to ataxia and other problems with movement.

This condition is inherited in an X-linked recessive pattern

. The gene associated with this condition is located on the X chromosome, which is one of the two sex chromosomes. In males (who have only one X chromosome), one altered copy of the gene in each cell is sufficient to cause the condition. In females (who have two X chromosomes), a mutation would have to occur in both copies of the gene to cause the disorder. Because it is unlikely that females will have two altered copies of this gene, males are affected by X-linked recessive disorders much more frequently than females. A characteristic of X-linked inheritance is that fathers cannot pass X-linked traits to their sons.

In X-linked recessive inheritance, a female with one altered copy of the gene in each cell is called a carrier. Carriers of an ABCB7 mutation can pass on the mutated gene but do not develop ataxia or other health problems associated with X-linked sideroblastic anemia and ataxia. However, carriers may have abnormally small, pale red blood cells and related changes that can be detected with a blood test. 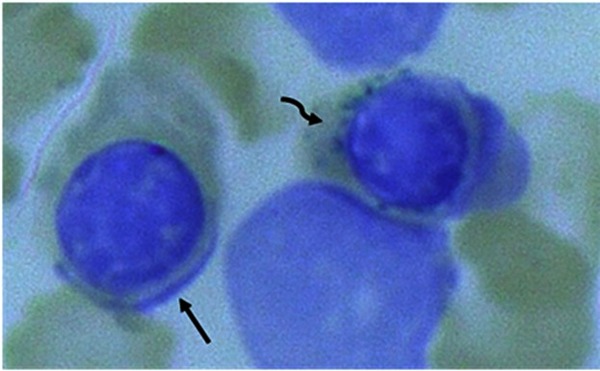