Wilson disease is an inherited disorder in which excessive amounts of copper accumulate in the body, particularly in the liver, brain, and eyes. The signs and symptoms of Wilson disease usually first appear between the ages of 6 and 45, but they most often begin during the teenage years. The features of this condition include a combination of liver disease and neurological and psychiatric problems.

Nervous system or psychiatric problems are often the initial features in individuals diagnosed in adulthood and commonly occur in young adults with Wilson disease. Signs and symptoms of these problems can include clumsiness, tremors, difficulty walking, speech problems, impaired thinking ability, depression, anxiety, and mood swings.

In many individuals with Wilson disease, copper deposits in the front surface of the eye (the cornea

) form a green-to-brownish ring, called the Kayser-Fleischer ring, that surrounds the colored part of the eye. Abnormalities in eye movements, such as a restricted ability to gaze upwards, may also occur.

Wilson disease is a rare disorder that affects approximately 1 in 30,000 individuals.

Wilson disease is caused by variants (also known as mutations) in the ATP7B gene. This gene provides instructions for making a protein called copper-transporting ATPase 2, which plays a role in the transport of copper from the liver to other parts of the body. Copper is necessary for many cellular functions, but it is toxic when present in excessive amounts. The copper-transporting ATPase 2 protein is particularly important for the elimination of excess copper from the body. Variants in the ATP7B gene prevent the transport protein from functioning properly. With a shortage of functional protein, excess copper is not removed from the body. As a result, copper accumulates to toxic levels that can damage tissues and organs, particularly the liver and brain.

Research indicates that a normal variation in the PRNP gene may modify the course of Wilson disease. The PRNP gene provides instructions for making prion protein, which is active in the brain and other tissues and appears to be involved in transporting copper. Studies have focused on the effects of a PRNP gene variation that affects position 129 of the prion protein. At this position, people can have either the protein building block (amino acid

) methionine or the amino acid valine. Among people who have variants in the ATP7B gene, it appears that having methionine instead of valine at position 129 of the prion protein is associated with delayed onset of symptoms and an increased occurrence of neurological symptoms, particularly tremors. Larger studies are needed, however, before the effects of this PRNP gene variation on Wilson disease can be established.

Learn more about the genes associated with Wilson disease

, which means both copies of the gene in each cell have variants. The parents of an individual with an autosomal recessive condition each carry one copy of the altered gene, but they typically do not show signs and symptoms of the condition. 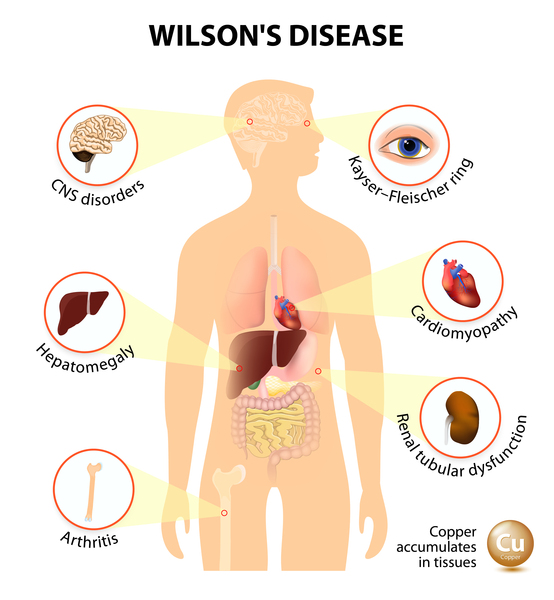