during early childhood. It remains unclear whether thiamine treatment can improve hearing or prevent hearing loss.

Diabetes becomes apparent in affected individuals sometime between infancy and adolescence. Although these individuals develop diabetes during childhood, they do not have the form of the disease that develops most often in children, called type 1 (autoimmune) diabetes. People with thiamine-responsive megaloblastic anemia syndrome usually require insulin

to treat their diabetes

. In some cases, treatment with thiamine can reduce the amount of insulin a person needs.

Some individuals with thiamine-responsive megaloblastic anemia syndrome develop optic atrophy, which is the degeneration (atrophy) of the nerves that carry information from the eyes to the brain

. Heart and blood vessel (cardiovascular) problems such as heart rhythm abnormalities and heart defects have also been reported in some people with this syndrome.

Thiamine-responsive megaloblastic anemia syndrome has been reported in approximately 30 families worldwide. Its prevalence is unknown.

Mutations in the SLC19A2 gene cause thiamine-responsive megaloblastic anemia syndrome. This gene provides instructions for making a protein called thiamine transporter 1, which transports thiamine into cells. Thiamine is found in many different foods and is important for numerous body functions.

Most mutations in the SLC19A2 gene lead to the production of an abnormally short, nonfunctional thiamine transporter 1. Other mutations change single protein building blocks (amino acids

) in this protein. All of these mutations prevent thiamine transporter 1 from bringing thiamine into the cell. It remains unclear how the absence of this protein leads to the seemingly unrelated symptoms of megaloblastic anemia, diabetes, and hearing loss. Research suggests that an alternative method for transporting thiamine is present in all the cells of the body, except where blood cells and insulin

are formed (in the bone marrow

, respectively) and cells in the inner ear 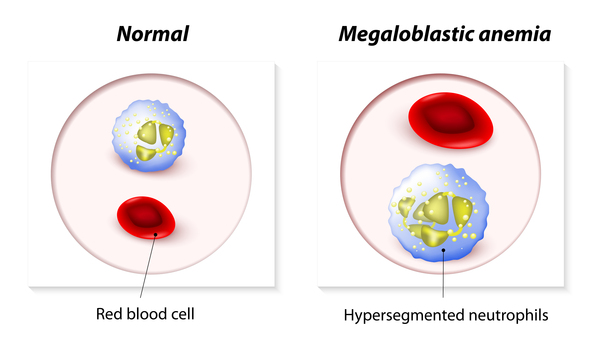