Succinic semialdehyde dehydrogenase deficiency is a disorder that can cause a variety of neurological problems. People with this condition typically have developmental delay, especially involving speech development; intellectual disability; and decreased muscle tone (hypotonia) soon after birth. About half of those affected experience seizures, difficulty coordinating movements (ataxia), decreased reflexes (hyporeflexia), and behavioral problems. The most common behavioral problems associated with this condition are sleep disturbances, hyperactivity, difficulty maintaining attention, and anxiety. Less frequently, affected individuals may have increased aggression, hallucinations, obsessive-compulsive disorder (OCD), and self-injurious behavior, including biting and head banging. People with this condition can also have problems controlling eye movements. Less common features of succinic semialdehyde dehydrogenase deficiency include uncontrollable movements of the limbs (choreoathetosis), involuntary tensing of the muscles (dystonia), muscle twitches (myoclonus), and a progressive worsening of ataxia.

in the brain (neurotransmitter) called gamma-amino butyric acid (GABA). The primary role of GABA is to prevent the brain from being overloaded with too many signals.

A shortage (deficiency) of succinic semialdehyde dehydrogenase leads to an increase in the amount of GABA and a related molecule called gamma-hydroxybutyrate (GHB) in the body, particularly the brain and spinal cord (central nervous system). It is unclear how an increase in GABA and GHB causes developmental delay, seizures, and other signs and symptoms of succinic semialdehyde dehydrogenase deficiency. 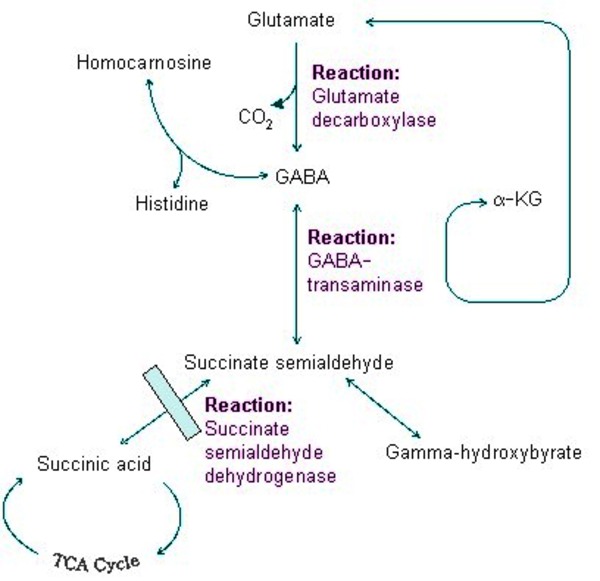