Ring chromosome 20 syndrome is a condition that affects the normal development and function of the brain. The most common feature of this condition is recurrent seizures (epilepsy) in childhood. The seizures may occur during the day or at night during sleep. They are described as partial seizures

because they affect only one area of the brain, a region called the frontal lobe. In many cases, the seizures are complex and resistant to treatment with anti-epileptic drugs. Prolonged seizure episodes known as non-convulsive status epilepticus also appear to be characteristic of ring chromosome 20 syndrome. These episodes involve confusion and behavioral changes.

Most people with ring chromosome 20 syndrome also have some degree of intellectual disability and behavioral difficulties. Although these problems can appear either before or after the onset of epilepsy, they tend to worsen after seizures develop. Additional features of this condition can include slow growth and short stature, a small head (microcephaly

Ring chromosome 20 syndrome appears to be a rare condition, although its prevalence is unknown. More than 60 affected individuals have been reported in the medical literature.

is a circular structure that occurs when a chromosome breaks in two places and its broken ends fuse together. People with ring chromosome 20 syndrome have one copy of this abnormal chromosome in some or all of their cells.

Learn more about the chromosome associated with Ring chromosome 20 syndrome

typically occurs as a random event during the formation of reproductive cells (eggs or sperm) or in early embryonic development. Often, the ring chromosome is present in only some of a person's cells. This situation is known as mosaicism

Most affected individuals have no history of the disorder in their families. However, at least one family has been reported in which a ring chromosome 20 was passed from a mother to her children. 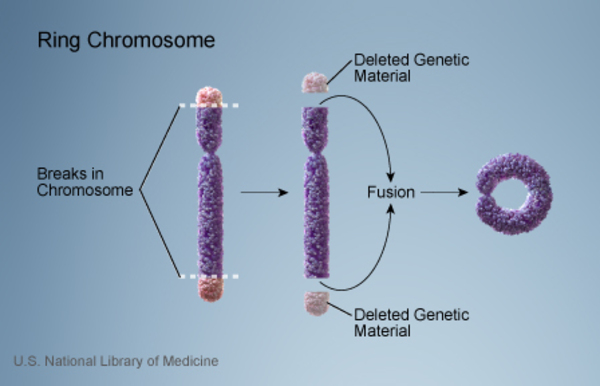