You Are Here:
Home →
Genetics →
Genetic Conditions →
PMM2-congenital disorder of glycosylation
URL of this page: https://medlineplus.gov/genetics/condition/pmm2-congenital-disorder-of-glycosylation/

Individuals with PMM2-CDG typically develop signs and symptoms of the condition during infancy. Affected infants may have weak muscle tone (hypotonia), retracted (inverted) nipples, an abnormal distribution of fat, eyes that do not look in the same direction (strabismus), developmental delay, and a failure to gain weight and grow at the expected rate (failure to thrive). Infants with PMM2-CDG also frequently have an underdeveloped cerebellum

, which is the part of the brain that coordinates movement. Distinctive facial features are sometimes present in affected individuals, including a high forehead, a triangular face

disorders. About 20 percent of affected infants do not survive the first year of life due to multiple organ failure.

The most severe cases of PMM2-CDG are characterized by hydrops fetalis, a condition in which excess fluid builds up in the body before birth. Most babies with hydrops fetalis are stillborn or die soon after birth.

People with PMM2-CDG who survive infancy may have moderate intellectual disability, and some are unable to walk independently. Affected individuals may also experience stroke-like episodes that involve an extreme lack of energy (lethargy) and temporary paralysis. Recovery from these episodes usually occurs over a period of a few weeks to several months.

During adolescence or adulthood, individuals with PMM2-CDG have reduced sensation and weakness in their arms and legs (peripheral neuropathy), an abnormal curvature of the spine (kyphoscoliosis

), impaired muscle coordination (ataxia), and joint deformities (contractures). Some affected individuals have an eye disorder called retinitis pigmentosa that causes vision loss. Females with PMM2-CDG have hypergonadotropic hypogonadism, which affects the production of hormones that direct sexual development. As a result, females with PMM2-CDG do not go through puberty. Affected males experience normal puberty but often have small testes.

More than 800 individuals with PMM2-CDG have been identified worldwide.

PMM2-CDG is caused by mutations in the PMM2 gene. This gene provides instructions for making an enzyme called phosphomannomutase 2 (PMM2). The PMM2 enzyme is involved in a process called glycosylation, which attaches groups of sugar molecules (oligosaccharides) to proteins. Glycosylation modifies proteins so they can perform a wider variety of functions. Mutations in the PMM2 gene lead to the production of an abnormal PMM2 enzyme with reduced activity. Without a properly functioning PMM2 enzyme, glycosylation cannot proceed normally. As a result, incorrect oligosaccharides are produced and attached to proteins. The wide variety of signs and symptoms in PMM2-CDG are likely due to the production of abnormally glycosylated proteins in many organs and tissues. 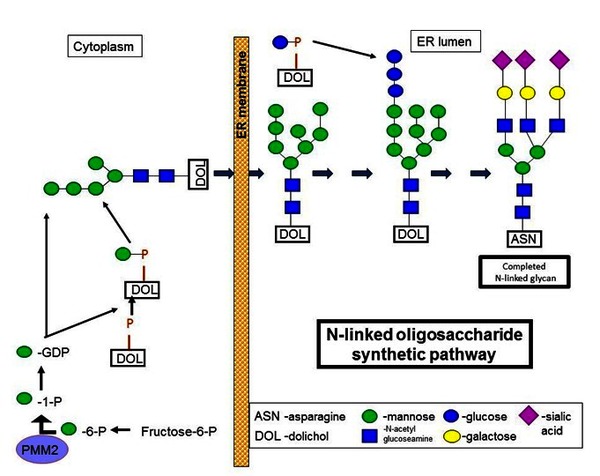