Pachyonychia congenita is a condition that primarily affects the skin and nails. The signs and symptoms of this condition usually become apparent within the first few years of life.

Almost everyone with pachyonychia congenita shows some signs of hypertrophic nail dystrophy, which causes the fingernails and toenails to become thick and abnormally shaped. Most affected children also develop very painful blisters and calluses on the soles of the feet and, less commonly, on the palms of the hands. This condition is known as palmoplantar keratoderma. Severe blisters and calluses on the feet usually first begin to form in childhood when they first start to walk, and can make walking painful or impossible.

Pachyonychia congenita can have several additional features, which vary among affected individuals. These features include thick, white patches on the tongue and inside of the cheeks (oral leukokeratosis); bumps called follicular keratoses that develop around hair follicles on the elbows, knees, and waistline; cysts in the armpits, groin, back, or scalp; and excessive sweating on the palms and soles (palmoplantar hyperhidrosis). Some affected individuals also develop widespread cysts called steatocystomas, which are filled with an oily substance called sebum that normally lubricates the skin and hair. Some babies with pachyonychia congenita have prenatal or natal teeth

, which are teeth that are present at birth or in early infancy. In some cases, pachyonychia congenita can affect the voice box (larynx

Researchers used to distinguish pachyonychia congenita as one of two types, PC-1 or PC-2, based on the genetic cause and pattern of signs and symptoms. However, as more affected individuals were identified, it became clear that the features of the two types overlapped considerably. Now researchers prefer a description of pachyonychia congenita based on the gene that is altered.

Although the prevalence of pachyonychia congenita is unknown, it is a rare disorder with several thousand people likely affected worldwide.

Mutations in several genes, including KRT6A, KRT6B, KRT6C, KRT16, and KRT17, can cause pachyonychia congenita. All of these genes provide instructions for making tough, fibrous proteins called keratins

. These proteins form networks that provide strength and resilience to the tissues that make up the skin, hair, and nails.

Mutations in keratin genes alter the structure of keratin proteins, which prevents these proteins from forming strong, stable networks within cells. Without this network, skin cells become fragile and are easily damaged, making the skin less resistant to friction and minor trauma. Even normal activities such as walking can cause skin cells to break down, resulting in the formation of severe, painful blisters and calluses. Defective keratins also disrupt the growth and function of cells in the hair follicles and nails, resulting in the other features of pachyonychia congenita.

Learn more about the genes associated with Pachyonychia congenita

Pachyonychia congenita is considered an autosomal dominant condition, which means one copy of the altered gene in each cell is sufficient to cause the disorder. In about 60 to 70 percent of all cases, an affected person inherits the mutation from one affected parent

. Thirty to 40 percent of cases result from a new (de novo) mutation

in the gene that occurs during the formation of reproductive cells (eggs or sperm) or in early embryonic development. These cases occur in people with no history of the disorder in their family. 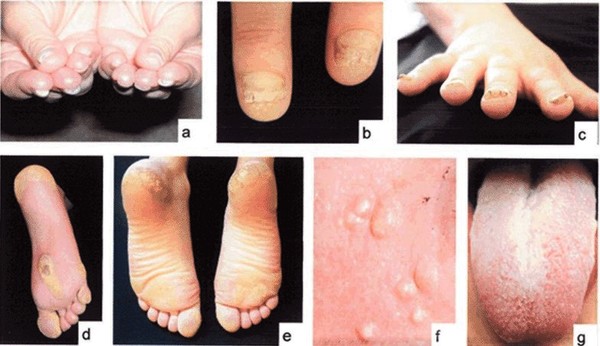