Ménière disease is a disorder of the inner ear

that affects balance and hearing. This condition is characterized by sudden episodes of extreme dizziness (vertigo), a roaring sound in the ears (tinnitus), a feeling of pressure or fullness in the ears, and fluctuations in hearing. Episodes are often associated with nausea and vomiting, and they can severely disrupt activities of daily living.

The episodes associated with Ménière disease generally last several hours. Studies suggest that episodes can be triggered by stress, tiredness (fatigue), emotional upset, illness, and dietary factors. The timing of these episodes is unpredictable; affected individuals may experience a cluster of episodes within a short period, followed by months or years without any symptoms.

Ménière disease usually appears in adulthood, most often in a person's 40s or 50s. It is much less common in children and young adults. The symptoms of the disorder typically begin in one ear, although they may later involve both ears.

Some people with Ménière disease have no symptoms of the disorder between episodes, particularly in the early stages of the disease. Over time, however, many affected individuals develop ongoing problems with unsteadiness, tinnitus, and a feeling of fullness in the ears. Additionally, permanent hearing loss eventually develops in many people with this disorder.

The prevalence of Ménière disease varies in different geographic regions and ethnic groups. It appears to be more common in people of European descent than in those with other backgrounds. In the United States, there are an estimated 615,000 people with Ménière disease, and more than 45,000 new cases are diagnosed each year.

The cause of Ménière disease is unknown, although it probably results from a combination of environmental and genetic factors.

Ménière disease is thought to be related to abnormalities

of the inner ear

, which contains structures that are needed for normal hearing and balance. Episodes of vertigo, tinnitus, and hearing loss likely result from fluctuating amounts of fluid in the inner ear. These changes disrupt signals sent from the inner ear to the brain that are related to sound and the body's position and movement.

Researchers have studied many possible risk factors for Ménière disease, including viral infections, trauma to the inner ear, noise pollution, allergies, abnormal immune system responses, and migraines. Studies have also examined changes in more than a dozen genes that might contribute to the signs and symptoms of this condition. However, none of the factors studied so far appears to play a major role in Ménière disease. Researchers are looking for additional environmental and genetic factors that are associated with this complex disorder.

Most cases of Ménière disease are sporadic, which means they occur in people with no history of the disorder in their family. A small percentage of all cases have been reported to run in families.

When the disorder is familial, it most often has an autosomal dominant pattern

of inheritance. Autosomal dominant inheritance means one copy of an altered gene in each cell is sufficient to increase the risk of the disorder. However, no associated genes have been identified. 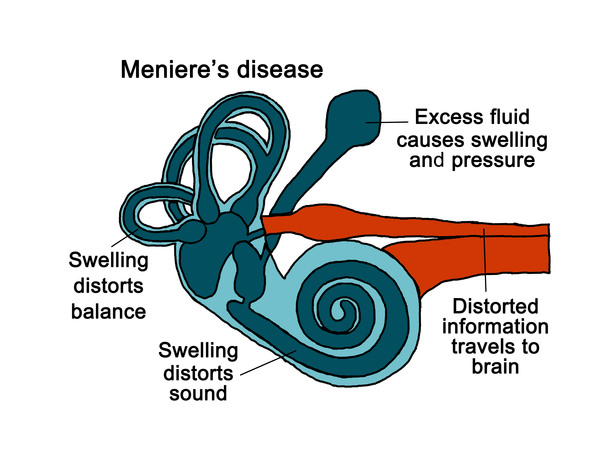