Incontinentia pigmenti is a condition that can affect many body systems, particularly the skin

. This condition occurs much more often in females than in males.

Incontinentia pigmenti is characterized by skin abnormalities that evolve throughout childhood and young adulthood. Many affected infants have a blistering rash

at birth and in early infancy, which heals and is followed by the development of wart-like skin growths

) that occur in a swirled pattern. These patches fade with time, and adults with incontinentia pigmenti usually have lines of unusually light-colored skin (hypopigmentation) on their arms and legs.

Other signs and symptoms of incontinentia pigmenti can include hair loss (alopecia) affecting the scalp and other parts of the body, dental abnormalities (such as small teeth

abnormalities that can lead to vision loss, and lined

fingernails and toenails. Most people with incontinentia pigmenti have normal intelligence; however, this condition may affect the brain. Associated problems can include delayed development or intellectual disability, seizures, and other neurological problems.

) in response to certain signals.

About 80 percent of affected individuals have a mutation that deletes some genetic material from the IKBKG gene. This deletion probably leads to the production of an abnormally small, nonfunctional version of the IKBKG protein. Other people with incontinentia pigmenti have mutations that prevent the production of any IKBKG protein. Without this protein, nuclear factor-kappa-B is not regulated properly, and cells are more sensitive to signals that trigger them to self-destruct. Researchers believe that this abnormal cell death leads to the signs and symptoms of incontinentia pigmenti.

Learn more about the gene associated with Incontinentia pigmenti

This condition is inherited in an X-linked dominant pattern

. In females (who have two X chromosomes), a mutation in one of the two copies of the gene in each cell is sufficient to cause the disorder. Some cells produce a normal amount of IKBKG protein and other cells produce none. The resulting imbalance in cells producing this protein leads to the signs and symptoms of incontinentia pigmenti.

In males (who have only one X chromosome), most IKBKG mutations result in a total loss of the IKBKG protein. A lack of this protein appears to be lethal early in development, so few males are born with incontinentia pigmenti. Affected males who survive may have an IKBKG mutation with relatively mild effects, an IKBKG mutation in only some of the body's cells (mosaicism

), or an extra copy of the X chromosome in each cell.

Some people with incontinentia pigmenti inherit an IKBKG mutation from one affected parent. Other cases result from new mutations in the gene and occur in people with no history of the disorder in their family. 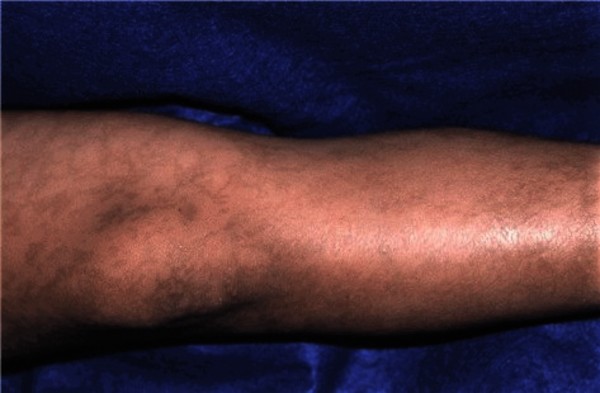