Huntington disease is a progressive brain

Adult-onset Huntington disease, the most common form of this disorder, usually appears in a person's thirties or forties. Early signs and symptoms can include irritability, depression, small involuntary movements, poor coordination, and trouble learning new information or making decisions. Many people with Huntington disease develop involuntary jerking or twitching movements known as chorea. As the disease progresses, these movements become more pronounced. Affected individuals may have trouble walking, speaking, and swallowing. People with this disorder also experience changes in personality and a decline in thinking and reasoning abilities. Individuals with the adult-onset form of Huntington disease usually live about 15 to 20 years after signs and symptoms begin.

Huntington disease affects an estimated 3 to 7 per 100,000 people of European ancestry. The disorder appears to be less common in some other populations, including people of Japanese, Chinese, and African descent.

Mutations in the HTT gene cause Huntington disease. The HTT gene provides instructions for making a protein called huntingtin. Although the function of this protein is unclear, it appears to play an important role in nerve cells (neurons) in the brain.

. This segment is made up of a series of three DNA building blocks (cytosine, adenine, and guanine) that appear multiple times in a row. Normally, the CAG segment is repeated 10 to 35 times within the gene. In people with Huntington disease, the CAG segment is repeated 36 to more than 120 times. People with 36 to 39 CAG repeats may or may not develop the signs and symptoms of Huntington disease, while people with 40 or more repeats almost always develop the disorder.

An increase in the size of the CAG segment leads to the production of an abnormally long version of the huntingtin protein. The elongated protein is cut into smaller, toxic fragments that bind together and accumulate in neurons, disrupting the normal functions of these cells. The dysfunction and eventual death of neurons in certain areas of the brain underlie the signs and symptoms of Huntington disease.

Learn more about the gene associated with Huntington disease

As the altered HTT gene is passed from one generation to the next, the size of the CAG trinucleotide repeat often increases in size. A larger number of repeats is usually associated with an earlier onset of signs and symptoms. This phenomenon is called anticipation

Individuals who have 27 to 35 CAG repeats in the HTT gene do not develop Huntington disease, but they are at risk of having children who will develop the disorder. As the gene is passed from parent to child, the size of the CAG trinucleotide repeat may lengthen into the range associated with Huntington disease (36 repeats or more). 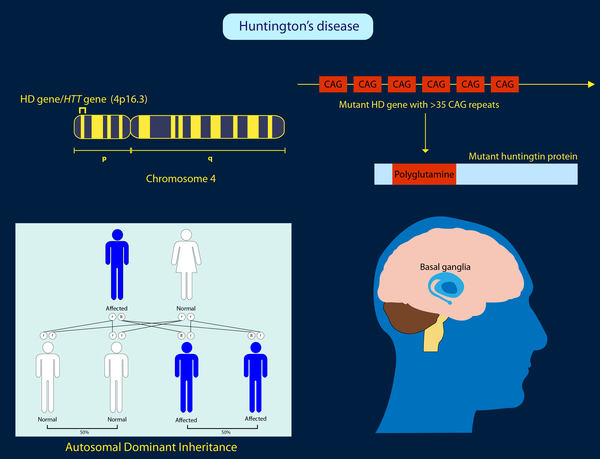