Hereditary pancreatitis is a genetic condition characterized by recurrent episodes of inflammation of the pancreas (pancreatitis). The pancreas produces enzymes that help digest food, and it also produces insulin

, a hormone that controls blood sugar levels in the body. Episodes of pancreatitis can lead to permanent tissue damage and loss of pancreatic function.

Years of inflammation damage the pancreas, causing the formation of scar tissue (fibrosis) in place of functioning pancreatic tissue. Pancreatic fibrosis leads to the loss of pancreatic function in many affected individuals. This loss of function can impair the production of digestive enzymes and disrupt normal digestion, leading to fatty stool (steatorrhea), weight loss, and protein and vitamin deficiencies. Because of a decrease in insulin production due to a loss of pancreatic function, about a quarter of individuals with hereditary pancreatitis will develop type 1 diabetes mellitus by mid-adulthood; the risk of developing diabetes increases with age.

Chronic pancreatic inflammation and damage to the pancreas increase the risk of developing pancreatic cancer. The risk is particularly high in people with hereditary pancreatitis who also smoke, use alcohol, have type 1 diabetes mellitus, or have a family history of cancer. In affected individuals who develop pancreatic cancer, it is typically diagnosed in mid-adulthood.

Complications from pancreatic cancer and type 1 diabetes mellitus are the most common causes of death in individuals with hereditary pancreatitis, although individuals with this condition are thought to have a normal life expectancy.

Hereditary pancreatitis is thought to be a rare condition. In Europe, its prevalence is estimated to be 3 to 6 per million individuals.

Mutations in the PRSS1 gene cause most cases of hereditary pancreatitis. The PRSS1 gene provides instructions for making an enzyme called cationic trypsinogen. This enzyme is produced in the pancreas

and helps with the digestion of food. When cationic trypsinogen is needed, it is released (secreted) from the pancreas and transported to the small intestine, where it is cut (cleaved) into its working or active form called trypsin. When digestion is complete and trypsin is no longer needed, the enzyme is broken down.

It is estimated that 65 to 80 percent of people with hereditary pancreatitis have mutations in the PRSS1 gene. The remaining cases are caused by mutations in other genes, some of which have not been identified.

Learn more about the genes associated with Hereditary pancreatitis

When hereditary pancreatitis is caused by mutations in the PRSS1 gene, it is inherited in an autosomal dominant pattern, which means one copy of the altered gene in each cell is sufficient to cause the disorder. In some cases, an affected person inherits the PRSS1 gene mutation from one affected parent

It is estimated that 20 percent of people who have the altered PRSS1 gene never have an episode of pancreatitis. (This situation is known as reduced penetrance.) It is unclear why some people with a mutated gene never develop signs and symptoms of the disease. 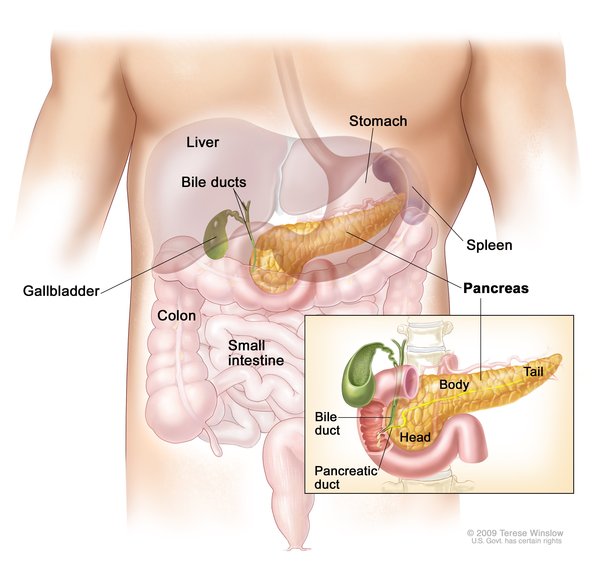