) to other parts of the body, such as the lymph nodes or lungs. If it spreads, the cancer has a worse prognosis and can be fatal. About half of affected individuals survive more than five years after diagnosis.

HNSCC is the seventh most common cancer worldwide. Approximately 600,000 new cases are diagnosed each year, including about 50,000 in the United States. HNSCC occurs most often in men in their 50s or 60s, although the incidence among younger individuals is increasing.

HNSCC is caused by a variety of factors that can alter the DNA in cells. The strongest risk factors for developing this form of cancer are tobacco use (including smoking or using chewing tobacco) and heavy alcohol consumption. In addition, studies have shown that infection with certain strains of human papillomavirus (HPV) is linked to the development of HNSCC. HPV infection accounts for the increasing incidence of HNSCC in younger people.

Researchers have identified mutations in many genes in people with HNSCC; however, it is not yet clear what role most of these mutations play in the development or progression of cancer. The proteins produced from several of the genes associated with HNSCC, including TP53

, NOTCH1, and CDKN2A, function as tumor suppressors, which means they normally keep cells from growing and dividing too rapidly or in an uncontrolled way. When tumor suppressors are impaired, cells can grow and divide without control, leading to tumor formation. It is likely that a series of changes in multiple genes is involved in the development and progression of HNSCC.

HNSCC is generally not inherited; it typically arises from mutations in the body's cells that occur during an individual's lifetime. This type of alteration is called a somatic mutation.

Rarely, HNSCC is found in several members of a family. These families have inherited disorders that increase the risk of multiple types of cancer. 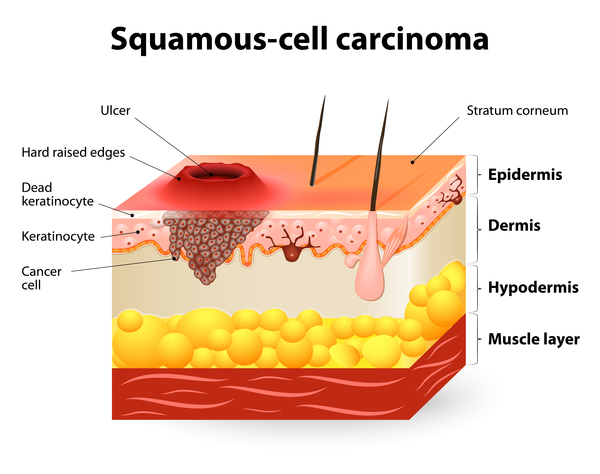