Small tumors may cause no signs or symptoms. However, some people with GISTs may experience pain or swelling in the belly area (abdomen), nausea, vomiting, loss of appetite, or weight loss. Sometimes, tumors cause bleeding into the gastrointestinal tract, which may lead to low red blood cell counts (anemia

Affected individuals with no family history of GIST typically have only one tumor (called a sporadic GIST). People with a family history of GISTs (called familial GISTs) often have multiple tumors and additional signs or symptoms, including noncancerous overgrowth (hyperplasia) of other cells in the gastrointestinal tract and patches of dark skin on various areas of the body. Some affected individuals have a skin condition called urticaria pigmentosa (also known as maculopapular cutaneous mastocytosis), which is characterized by raised patches of brownish skin that sting or itch when touched.

Approximately 5,000 new cases of GIST are diagnosed in the United States each year. SDH-deficient GIST accounts for about 5 to 7 percent of cases. However, GISTs may be more common than the estimate because small tumors may remain undiagnosed.

The KIT and PDGFRA genes provide instructions for making receptor proteins that are found in the cell membrane of certain cell types. Receptor proteins have specific sites into which certain other proteins, called ligands, fit like keys into locks. When a ligand attaches (binds), the KIT or PDGFRA receptor protein is turned on (activated), which leads to activation of a series of proteins in multiple signaling pathways. These signaling pathways control many important cellular processes, such as cell growth and division (proliferation) and survival.

Mutations in the KIT and PDGFRA genes lead to proteins that no longer require ligand binding to be activated. As a result, the proteins and the signaling pathways are constantly turned on (constitutively activated), which increases the proliferation and survival of cells and leads to the formation of tumors.

The SDHA, SDHB, SDHC, and SDHD genes provide instructions for making proteins that come together to form the succinate dehydrogenase (SDH) enzyme. The SDH enzyme is involved in cellular pathways that are critical for converting the energy from food into a form that cells can use. Specifically, the SDH enzyme converts a compound called succinate to another compound called fumarate. Succinate acts as an oxygen sensor in the cell and can help turn on specific pathways that stimulate cells to grow in a low-oxygen environment (hypoxia).

Learn more about the genes associated with Gastrointestinal stromal tumor

Most cases of GIST are sporadic and are not inherited. These cases are associated with a somatic mutation, which is a genetic change that occurs only in the tumor cells and occurs during a person's lifetime.

In some cases of familial GIST, including those associated with mutations in the KIT and PDGFRA genes, the condition is usually inherited in an autosomal dominant pattern

, which means one copy of the altered gene in each cell is sufficient to increase a person's chance of developing tumors. A second, somatic mutation is needed for tumor formation.

When familial GIST is associated with mutations in other genes, it can have an autosomal recessive pattern

of inheritance, which means alterations in both copies of the gene in each cell increase a person's chance of developing tumors.

SDH-deficient GIST follows an autosomal dominant inheritance pattern; a mutation in one copy of the SDHA, SDHB, SDHC, or SDHD gene is sufficient to increase a person's chance of developing tumors, and a somatic mutation altering the other copy of the gene is needed for tumor formation. A particular alteration in the SDHC gene is not inherited. This genetic change is typically associated with Carney triad. 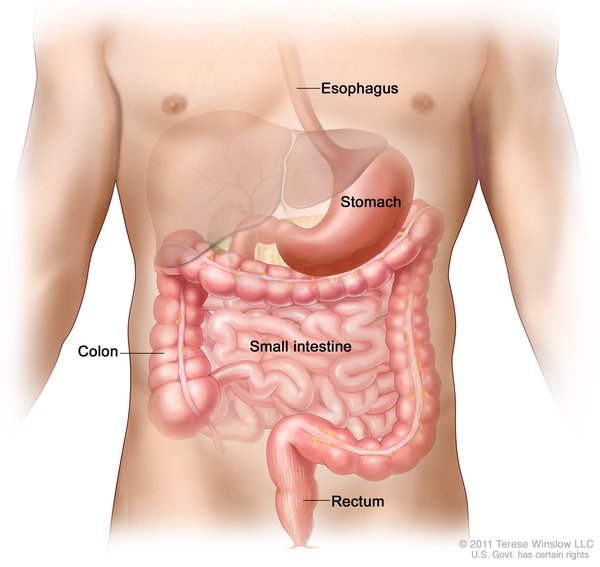