) in areas of the brain called the frontal and temporal lobes. Over time, a loss of these cells can affect personality, behavior, language, and movement.

The signs and symptoms of FTDP-17 usually become noticeable in a person's forties or fifties. Most affected people survive 5 to 10 years after the appearance of symptoms, although a few have survived for two decades or more.

Changes in personality and behavior are often early signs of FTDP-17. These changes include a loss of inhibition, inappropriate emotional responses, restlessness, neglect of personal hygiene, and a general loss of interest in activities and events. The disease also leads to deterioration of cognitive functions (dementia), including problems with judgment, planning, and concentration. Some people with FTDP-17 develop psychiatric symptoms, including obsessive-compulsive behaviors, strongly held false beliefs (delusions), and false perceptions (hallucinations). It may become difficult for affected individuals to interact with others in a socially appropriate manner. They increasingly require help with personal care and other activities of daily living.

FTDP-17 is also characterized by problems with movement that worsen over time. Many affected individuals develop features of parkinsonism, including tremors, rigidity, and unusually slow movement (bradykinesia). As the disease progresses, most affected individuals become unable to walk. Some people with FTDP-17 also have restricted up-and-down eye movement (vertical gaze palsy) and rapid abnormal movements of both eyes (saccades).

The worldwide prevalence of FTDP-17 is unknown. In the Netherlands, where the disease prevalence has been studied, it is estimated to affect 1 in 1 million people. However, the disorder is likely underdiagnosed, so it may actually be more common than this estimate.

FTDP-17 probably accounts for a small percentage of all cases of frontotemporal dementia.

FTDP-17 is caused by mutations in the MAPT gene. This gene is located on chromosome 17, which is how the disease got its name.

The MAPT gene provides instructions for making a protein called tau. This protein is found throughout the nervous system, including in neurons in the brain. It is involved in assembling and stabilizing microtubules, which are rigid, hollow fibers that make up a cell's structural framework (the cytoskeleton). Microtubules help cells maintain their shape, assist in the process of cell division, and are essential for the transport of materials within cells.

Mutations in the MAPT gene disrupt the normal structure and function of tau. The defective protein forms abnormal clumps within neurons and other brain cells. However, it is unclear what effect these clumps have on cell function and survival. FTDP-17 is characterized by the gradual death of cells in the frontal and temporal lobes of the brain. The frontal lobes are involved in reasoning, planning, judgment, and problem-solving, while the temporal lobes help process hearing, speech, memory, and emotion. A loss of cells in these brain regions leads to personality changes, speech difficulties, and the other features of FTDP-17.

FTDP-17 is one of several related diseases known as tauopathies, which are characterized by an abnormal buildup of tau in the brain. 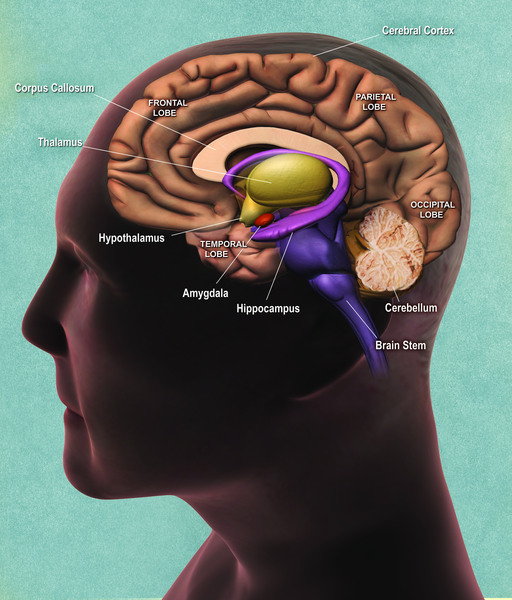