You Are Here:
Home →
Genetics →
Genetic Conditions →
Erythromelalgia
URL of this page: https://medlineplus.gov/genetics/condition/erythromelalgia/

Erythromelalgia is a condition characterized by episodes of pain, redness, and swelling in various parts of the body, particularly the hands and feet. These episodes are usually triggered by increased body temperature, which may be caused by exercise or entering a warm room. Ingesting alcohol or spicy foods may also trigger an episode. Wearing warm socks, tight shoes, or gloves can cause a pain episode so debilitating that it can impede everyday activities such as wearing shoes and walking. Pain episodes can prevent an affected person from going to school or work regularly.

The signs and symptoms of erythromelalgia typically begin in childhood, although mildly affected individuals may have their first pain episode later in life. As individuals with erythromelalgia get older and the disease progresses, the hands and feet may be constantly red, and the affected areas can extend from the hands to the arms, shoulders, and face, and from the feet to the entire legs.

Erythromelalgia is often considered a form of peripheral neuropathy because it affects the peripheral nervous system, which connects the brain and spinal cord to muscles and to cells that detect sensations such as touch, smell, and pain.

The prevalence of erythromelalgia is unknown.

The SCN9A gene mutations that cause erythromelalgia

result in NaV1.7 sodium channels that open more easily than usual and stays open longer than normal, increasing the flow of sodium ions into nociceptors. This increase in sodium ions enhances transmission of pain signals, leading to the signs and symptoms of erythromelalgia. It is unknown why the pain episodes associated with erythromelalgia mainly occur in the hands and feet.

Learn more about the gene associated with Erythromelalgia

Some cases of erythromelalgia occur in an autosomal dominant pattern, which means one copy of the altered gene in each cell is sufficient to cause the disorder. In some of these instances, an affected person inherits the mutation from one affected parent 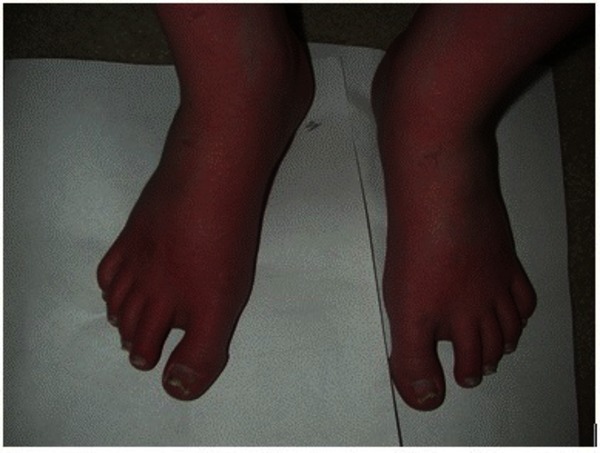