CYLD cutaneous syndrome is a genetic condition characterized by the growth of multiple noncancerous (benign) skin tumors. These tumors develop from structures associated with the skin (skin appendages), such as hair follicles

. More than one type of skin tumor often develops, including benign growths called cylindromas, spiradenomas, and trichoepitheliomas. Cylindromas were previously thought to derive from sweat glands, but they are now generally believed to begin in hair follicles and often appear on the scalp. Spiradenomas are related to cylindromas and it is common to find features of both of these benign growths in a single tumor. Trichoepitheliomas arise from hair follicles and typically develop on the skin around the nose and upper lip.

While the skin tumors associated with CYLD cutaneous syndrome are typically benign, occasionally they may become cancerous (malignant). When becoming malignant, tumors often grow rapidly and become open sores (ulcers). Affected individuals are also at increased risk of developing tumors in structures other than skin; for example benign or malignant tumors of the salivary glands

occur in some people with the condition.

People with CYLD cutaneous syndrome typically begin developing tumors in late childhood or in their teens. For reasons that are unclear, females with CYLD cutaneous syndrome tend to develop more tumors than males with this condition. Tumors tend to grow larger and increase in number over time. Large benign tumors may become ulcers and prone to infections. The tumors are most often found on the head and neck, including the scalp. Tumors that occur in the eyes, ears, nose, or mouth can affect the senses, including vision and hearing. Less frequently, tumors develop on the torso, armpits, or genitals. Genital tumors may cause pain and sexual dysfunction. Rarely, cylindromas develop in the airways

and can cause problems with breathing (respiratory insufficiency).

The tumors in CYLD cutaneous syndrome can be disfiguring and may contribute to depression or other psychological problems.

CYLD cutaneous syndrome includes the conditions previously called Brooke-Spiegler syndrome, multiple familial trichoepithelioma, and familial cylindromatosis. These conditions were once thought to be distinct disorders but are now considered to be the same condition.

The prevalence of CYLD cutaneous syndrome is unknown, but the condition is estimated to affect more than 1 in 100,000 individuals. More than 100 affected families have been reported in the scientific literature.

CYLD cutaneous syndrome is caused by mutations in the CYLD gene. The CYLD gene provides instructions for making an enzyme that helps regulate numerous signaling pathways, many of which are involved in cell growth. By regulating these signaling pathways, the CYLD enzyme helps cells respond properly to signals that promote cell growth and division (proliferation) or self-destruction (apoptosis

), as necessary. The CYLD enzyme acts as a tumor suppressor, which means that it helps prevent cells from growing and dividing too fast or in an uncontrolled way

People with CYLD cutaneous syndrome are born with a mutation in one of the two copies of the CYLD gene in each cell. This mutation prevents the cell from making functional CYLD enzyme from the altered copy of the gene. However, enough enzyme is usually produced from the remaining, normal copy of the gene to regulate cell growth effectively. For tumors to develop, a second mutation that alters or removes (deletes) the normal copy of the CYLD gene must occur. The second mutation, called a somatic mutation, occurs during a person's lifetime and is found in only certain cells in the body.

When both copies of the CYLD gene are mutated, the cell cannot produce any functional CYLD enzyme. The loss of this enzyme allows the cell to grow and divide in an uncontrolled way to form a tumor. In people with CYLD cutaneous syndrome, a second CYLD gene mutation typically occurs in multiple cells over an affected person's lifetime. The loss of CYLD enzyme in different types of cells, especially those in structures in the skin, leads to the growth of a variety of tumors.

Learn more about the gene associated with CYLD cutaneous syndrome

, which means one copy of the altered CYLD gene in each of the body’s cells increases the risk of developing this condition. The initial genetic change is known as a germline mutation, which most individuals with this condition inherit from a parent. A second, somatic mutation is required for development of tumors in CYLD cutaneous syndrome. Depending when the second mutation occurs, the benign tumors may be clustered to one side of the body or face.

Rarely, the first CYLD gene mutation is not inherited but is a somatic mutation that occurs early in development. As a result, some of the body's cells have a normal version of the gene, while others have the mutated version. This situation is called mosaicism

. As in inherited cases, a second somatic mutation in the normal copy of the gene later in life is required for tumors to develop. These cases of CYLD cutaneous syndrome are not inherited and typically occur in people with no history of the disorder in their family. 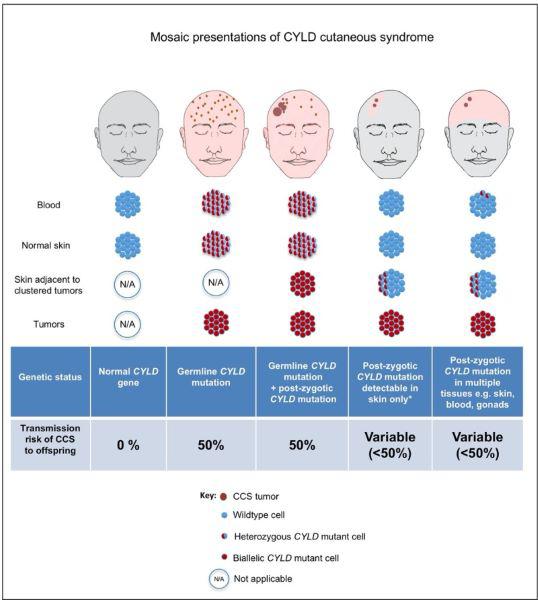